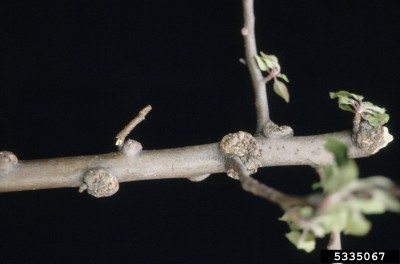 I grew up in an area near an old apple orchard and the old, gnarled trees were something to see, like great arthritic old ladies anchored into the earth. I always wondered about the knobby growths on the apple trees and since then have discovered that there are a couple of things that can cause them. Read on to learn more about these apple tree growths.

Burr knots on apple trees are particularly common on some apple varieties, especially early “June” cultivars. Apple tree burr knots (also spelled burrknots) are clumps of twisted or knobby growths on apple tree branches, usually when they are three years old or older. This occurrence increases on dwarf rootstocks. The outgrowths can produce both shoots and roots, so if you want to start another tree, you need only prune the affected branch from the mother and plant it.

The downside of burr knots on apple trees is that they can be an entry point for disease and pests. Also, a tree bearing a large yield of apples combined with many burr knots may become weak and break if the wind picks up.

As mentioned, some cultivars are more prone than others, and conditions such as low light, high humidity, and temps between 68 and 96 degrees F. (20-35 C.) may facilitate the production of burr knots. Also, there is some indication that wooly aphid infestations are causing injuries that result in forming knots. Burrknot borers may also be a cause.

Choose rootstock that is less prone to burr production. You may also paint Gallex on the knots, which can aid in callus formation or healing. If the tree is severely afflicted, you may want to take it out altogether since numerous burr knots can weaken the tree, opening it up for infection or infestation that will eventually kill it.

Another possible cause for a gnarly prominence might be crown galls on apple tree limbs. Apple tree crown gall causes tumor-like galls to form predominately on the roots and trunks but, on occasion, the branches of not just apples but many other shrubs and trees can be affected as well. Galls interrupt the flow of water and nutrients in the tree. Young seedlings with multiple galls or one encompassing the entire girth of the tree will often die. Mature trees are not as susceptible.

The Webster’s definition for the word ‘gall’ is “a skin sore caused by chronic irritation.” That is indeed what is happening to the “skin” of the tree. It has become infected with the bacterium Agrobacterium tumefaciens, which is found in over 600 species of plants worldwide.

Galls on apple tree limbs are the result of the bacteria entering the root system via injury caused by planting, grafting, soil insects, excavation, or another form of a physical wound. The bacteria sense the chemicals emitted by the wounded roots and moves in. Once the bacteria have invaded, they induce the cells to create overly large amounts of plant hormones which lead to gall formation. In other words, the infected cells divide exponentially and increase to unusually large sizes much like cancer cells do.

The infection can be spread to other susceptible plants through contaminated pruning implements, and it will also survive in the soil for many years potentially infecting future plantings. The bacteria are also commonly moved to new locations on the roots of infected plants that are getting transplanted. These galls break down over time and the bacteria are returned to the soil to be dispersed by water movement or equipment.

Really, the only control method for apple tree gall is prevention. Once the bacterium is there, it is difficult to eradicate. Choose new plants carefully and inspect them for signs of injury or infection. If you do identify a young tree with gall, it is best to dig it up along with the soil surrounding it and dispose of it; don’t add it to the compost pile! Burn the infected tree. More mature trees often tolerate the infection and can be left alone.

If you have identified gall in the landscape, be wary about introducing susceptible plants such as roses, fruit trees, poplar, or willow. Always sterilize pruning implements to avoid cross-contamination.

Lastly, trees can be protected from apple crown gall prior to transplantation. Dip the roots with a solution of water and the biological control bacteria Agrobacterium radiobacter K84. This bacterium produces a natural antibiotic that sits in wound sites preventing infestation of A. tumefaciens.