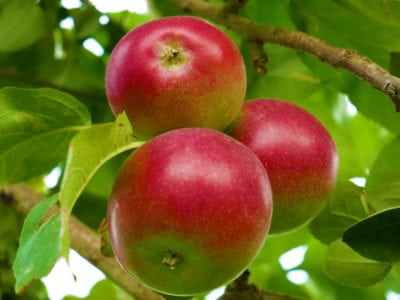 If you want to include a great late season apple tree in your home orchard, consider a Belmac. What is a Belmac apple? It’s a relatively new Canadian hybrid with immunity to apple scab. For more Belmac apple information, read on.

What is a Belmac Apple?

So exactly what is a Belmac apple? This apple cultivar was released by the Horticultural Research and Development Centre in Quebec, Canada. Its disease resistance and cold hardiness make it a desirable addition to a northern garden.

These fruits are lovely and colorful. At harvest, the apples are almost entirely red, but with a little of the chartreuse green under-color showing. The flesh of the fruit is white with a tinge of pale green. Belmac apple juice is a rose color.

Before you begin growing Belmac apple trees, you’ll want to know something about their taste, which has the same sweet but tart flavor as McIntosh apples. They have a medium or coarse texture and firm flesh.

Belmacs ripen in autumn, about late September or early October. The apples store extremely well once harvested. Under proper conditions, the fruit remains delicious for up to three months. Belmac apple information also makes it clear that the fruit, although aromatic, does not become waxy during this time in storage.

Belmac apple trees thrive in U.S. Department of Agriculture plant hardiness zones 4 through 9. The trees are upright and spreading, with elliptic green leaves. The fragrant apple blossoms open to a lovely rose color, but in time they fade to white.

If you are wondering how to grow Belmac apple trees, you’ll find that it’s not a difficult fruit tree. One reason growing Belmac apple trees is easy is the disease resistance, as they are immune to apple scab and resist mildew and cedar apple rust. This means you’ll have to do less spraying, and little Belmac apple care.

The trees are extremely productive year after year. According to Belmac apple information, apples grow largely on wood that is two years old. You’ll find that they are distributed evenly throughout the entire canopy of the tree.