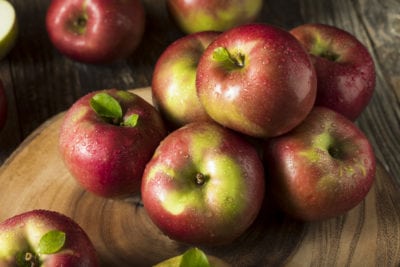 McIntosh apple trees were discovered by John McIntosh in 1811, purely by chance when he was clearing land on his farm. The apple was given the family name of McIntosh. Although no one knows exactly what cultivar is the parent to McIntosh apple trees, the similar flavor suggests Fameuse, or Snow apple.

This unexpected discovery became integral to apple production throughout Canada, as well as the Midwest and Northeast United States. McIntosh is hardy to USDA zone 4, and are the designated apple of Canada.

McIntosh apples are bright red with a blush of green. The percentage of green to red skin depends on when the apple is harvested. The earlier the fruit is harvested, the greener the skin will be and vice versa for late harvested apples. Also, the later the apples are harvested, the sweeter they will be. McIntosh apples are exceptionally crisp and juicy with bright white flesh. At harvest, the flavor of McIntosh is quite tart but the taste mellows during cold storage.

McIntosh apple trees grow at a moderate rate and at maturity will attain heights of around 15 feet (4.5 m). They bloom in early to mid-May with a profusion of white blossoms. The resulting fruit ripens by mid to late September.

How to Grow McIntosh Apples

McIntosh apples should be situated in full sun with well-draining soil. Prior to planting the tree, soak the roots in water for 24 hours.

Meanwhile, dig a hole that is twice the diameter of the tree and 2 feet (60 cm.) deep. After the tree has soaked for 24 hours, check the depth of the hole by placing the tree inside. Make sure that the tree graft will not be covered by soil.

In a 3-foot (just under a meter) circle, lay a good layer of mulch around the tree to retard weeds and retain moisture. Be sure to keep the mulch away from the tree trunk.

To produce fruit, the apples need to be cross-pollinated with a different apple variety of a crabapple.

Young apple trees should be pruned to create a strong framework. Prune scaffold branches by trimming them back. This hardy tree is relatively low maintenance once established. Like all fruit trees, it should be pruned out each year to remove any dead, damaged or diseases limbs.

Fertilize newly planted and young McIntosh trees three times per year. One month after planting a new tree, fertilize with a nitrogen rich fertilizer. Fertilize again in May and again in June. In the second year of the tree’s life, fertilize the tree in the early spring and then again in April, May, and June with nitrogen fertilizer such as 21-0-0.

Water the apple deeply twice a week when the weather is dry.

Inspect the tree every so often for any signs of disease or insects.