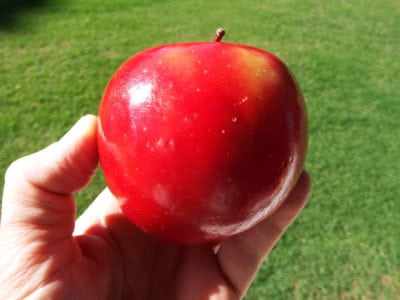 Image by Forest and Kim Starr

What is a Red Rome Apple?

Red Rome apples trees are spur-bearing trees that allow fruit to form on each limb, which means more fruit! Because of their prolific yields, they were once referred to as ‘mortgage maker.’

As mentioned, they are not nor were they named for the Eternal City of Roma, but for the small town of Ohio that shares that venerable name. Initially, however, this apple was named for its discoverer, Joel Gillet, who found a chance seedling in a shipment of trees that looked unlike any of the others. The seedling was planted along the banks of the Ohio River in 1817.

Years later a relative of Joel Gillet took cuttings from the tree and started a nursery with the apple he called, ‘Gillett’s seedling.’ A decade later, the tree was renamed the Rome Beauty, an homage to the town where it was discovered.

During the 20th century, Rome apples became known as the “queen of the baking apples” and became part of the “Big Six,” the sextet of Washington State grown apples that includes Reds, Goldens, Winesap, Jonathan, and Newtowns.

Red Rome apples are cold-hardy and self-pollinating, although to increase their size, another pollinator such as Fuji or Braeburn would be beneficial.

Red Rome apples will keep for 3-5 months in cold storage.

How to Grow a Red Rome Apple

Red Rome apples can be grown in USDA zones 4-8 but, surprisingly, due to their low chilling requirements, can be grown in warmer regions as well. They produce shiny, red apples in just 2-3 years from planting.

Select a site to plant the Red Rome tree that is in full sun in loamy, rich, well-draining soil with a soil pH of 6.0-7.0. Prior to planting, soak the tree’s roots in a bucket of water for an hour or two.

Dig a hole that is wide enough to accommodate the rootball plus a little extra. Loosen the soil around the rootball. Situate the tree so it is perfectly vertical and its roots are spread out. Fill in around the tree with the soil that has been dug out, tamping down to remove any air pockets.

Red Rome apples have thick skins that make them excellent baking apples. They will keep their shape when sautéed or poached or when cooked in any other manner. They also make delicious pressed cider as well as pies, cobblers, and crisps. They are good for eating fresh from the tree too.