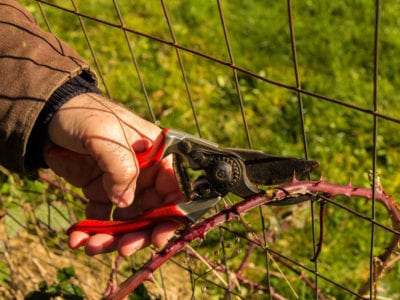 When to Prune Blackberry Bushes

One of the most common questions about blackberries is, “When do you cut back blackberry bushes?” There are actually two different types of blackberry pruning you should be doing and each must be done at different times of the year.

While you are tip pruning, you can also prune off any diseased or dead canes.

In the summer, after the blackberries are done fruiting, you will need to do clean up blackberry pruning. Blackberries only produce fruit on canes that are two years old, so once a cane has produced berries, it will never produce berries again. Cutting these spent canes off the blackberry bush will encourage the plant to produce more first year canes, which in turn will mean more fruit producing canes next year.

When pruning blackberry bushes for clean up, use a sharp, clean pair of pruning shears and cut off at ground level any canes that produced fruit this year (two year old canes).