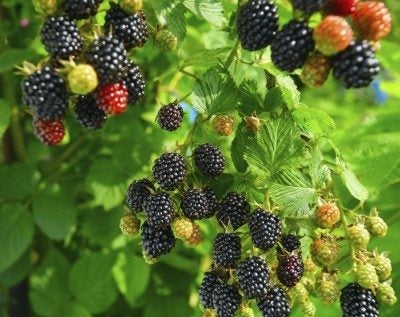 Many of us love plucking ripe blackberries from those wild, rambling bushes we see along roadsides and wooded edges. Wondering about how to grow blackberries in your garden? Keep reading for more information so you can produce some of your own tasty berries.

Blackberries are a common sight in many regions of the United States, eaten fresh or used in baked goods or preserves. Those who pick the wild rambling berries do so forearmed with the knowledge that the prickly vines are likely to inflict some damage whilst plucking the tender fruit. The good news is that growing blackberry bushes in the home garden doesn’t have to be an exercise in pain; there are new thornless cultivars available.

Blackberries thrive in climates with warm days and cool nights. They may be erect, semi-erect or trailing in habit. The erect type of berry has thorny canes they grow upright and need no support. They produce large, sweet berries and are more winter hardy than their counterparts.

Semi-erect blackberries come in both thorned and thornless cultivars which produce more prodigiously then the erect cultivars. Their fruit is also quite large and may vary in flavor, from tart to sweet. These berries do need some support.

Trailing blackberry varieties may also be thorny or thornless. The large, sweet berries do require some support and they are the least winter hardy of the cultivars.

Each type is self-fruitful, meaning only one plant is necessary to set fruit. Now that you’ve made your choice, it’s time to learn how to grow blackberries.

How to Grow Blackberries

Once you have decided on the type of blackberry you wish to grow, its blackberry planting time. When growing blackberry bushes, it’s a good idea to think ahead and prepare the planting site a year prior to planting.

Make sure not to plant blackberries anywhere peppers, tomatoes, eggplants, potatoes or strawberries are growing, or have grown in the past three years. These plants are prone to similar problems as growing blackberry plants, so keep away from these areas.

Choose a site that is in full sun and has plenty of room for the ramblers to grow. If you put them in too much shade, they won’t produce much fruit.

The soil should be a well-draining sandy loam with a pH of 5.5-6.5. If you lack an area with sufficient drainage, plan on growing blackberry bushes in a raised bed. Once you have chosen your site, weed the area and amend the soil with organic matter the summer or fall prior to blackberry planting.

Purchase a certified disease-free variety of blackberry that is recommended for your area. Plant as soon as the soil can be worked in the spring. Dig a hole large enough to accommodate the root system. Build a trellis or system of training wires at the time of planting.

Once the bushes are established, there is very little blackberry plant care needed. Water regularly; provide an inch (2.5 cm.) of water per week depending upon weather conditions. Allow 3-4 new canes per plant to grow to the top of the training wire or trellis. Keep the area around the plants free of weeds.

In the first year of growing blackberry bushes, expect to have a small batch of fruit and a full harvest in the second year. After you see ripened fruit, try picking blackberries every three to six days. This prevents the birds from getting the berries before you do. Once the fruit has been harvested, prune out the fruiting canes which will not produce again.

Fertilize new plants once new growth appears with a complete fertilizer such as 10-10-10 in the first year. Established plants should be fertilized before new spring growth emerges.

Printer Friendly Version
Read more about Blackberries
Next>
Did you find this helpful? Share it with your friends!
FacebookTweetPinEmail
Related Articles
Newest Articles
You might also like…
Additional Help & Information