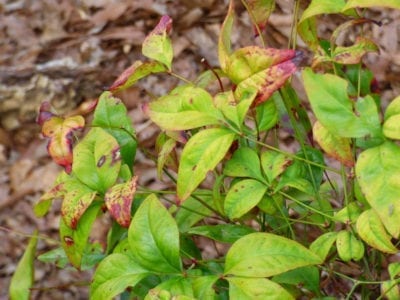 Spotting on leaves may mean more than a cosmetic problem. There are several types of blueberry leaf spot, most of which are caused by different fungi, which can seriously affect the crop. Blueberries with leaf spot often look like they were injured with chemical sprays or hail, but other signs can help discern fungal diseases from mechanical or environmental injury. Early leaf spot control on blueberry with selected fungicide can help prevent these diseases from taking hold and causing defoliation and reduced vigor.

Blueberries with leaf spot are common at any point in the growing season. While there may be some signs of disease on flowers, stems or even fruit, the primarily affected part is the leaf. As the disease progresses, the leaves begin to die and fall off. Such defoliation reduces a plant’s ability to photosynthesize. Recognizing disease symptoms is key to designing effective blueberry leaf spot treatment and prevention of disease the next season.

Anthracnose and Septoria are the two main causes of leaf spotting. Each is a fungal organism that overwinters in soil or plant debris and spreads primarily through rain splashing. Alternaria is another common leaf spot fungus which attacks many types of plants. Gloeocercospora leaf spot is also prevalent on blueberry crops but causes little major damage. Valdensinia is a relatively new disease that causes early leaf drop and low plant vigor.

No matter the fungal organism, most types of blueberry leaf spot occur during wet periods. The moisture causes the overwintered spores to flourish and spread. Symptoms may appear as early as three days after infection but, in most cases, take up to 4 weeks to appear.

Most infections occur in early spring when temperatures are warming and rains are most prevalent and attack the newest growth. Mature leaves are rarely affected severely. The best leaf spot control on blueberry is clean up post season. Most disease overwinters in dispelled plant matter, which should be removed and destroyed.

Symptoms on Blueberries with Leaf Spot

The overall symptoms are very similar in each disease organism. A closer look can help define which disease type is affecting the plant.

End of season cleanup is crucial. There are several cultivars that have been bred with resistance to many of these diseases and include:

Fungicides should be used in areas with leaf spot problems. An early application is recommended followed by treatment every 2 weeks from harvest until August. Benlate and Captan are the two most used fungicides in blueberry production.

Avoid walking around blueberry stands as a single leaf transmitted to an uninfected blueberry can spread infection. In some cases, the disease can move on contaminated machinery, containers and tools. Disinfect each as you move from plant to plant.

Many commercial growers top their plants after harvest, removing old foliage. The new foliage that emerges will nourish the plant and generally is free of disease. The use of resistant cultivars combined with fungicides and good hygienic practices can drastically reduce leaf spot disease and its movement from plant to plant.