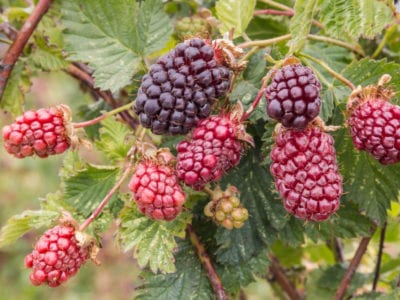 Not every berry you eat grows naturally on the planet. Some, including boysenberries, were created by growers, but that doesn’t mean that you don’t have to maintain them. If you want to grow boysenberries, you’ll need to undertake regular boysenberry pruning. For tips on cutting back boysenberries, read on.

Boysenberries resulted from a cross between the European raspberry, the blackberry, and the loganberry by Napa farmer Rudolf Boysen during the 1920s. These luscious berries offer the dark color and intense sweetness of a blackberry with the tartness of a raspberry.

Boysenberries are brambles, like their genetic parents, and many varieties have canes armed with noteworthy thorns. Like most brambles, boysenberries require a trellis system to support their weight.

Boysenberries only produce fruit on canes from the prior year called floricanes. The first year of the life for a boysenberry cane is termed a primocane. Primocanes do not produce fruit until the following year when they become floricanes.

During any typical growing season, your berry patch will have both primocanes and floricanes present. This can complicate the process of boysenberry pruning at first, but you’ll soon learn to tell the difference.

How to Prune Boysenberries

You start cutting back boysenberries to ground level in early winter, but only the floricanes. Distinguish the floricanes by their brown or grey coloring and thick, woody size. Primocanes are younger, greener, and thinner.

This winter pruning is the core work of trimming a boysenberry patch. But if you want to learn how to prune boysenberries in summer, there are a few things to learn.

You want to cut off the tips of primocanes in spring and summer as they grow to the top of your trellis system. Tipping in this way causes them to form lateral branches, which ups the fruit production.

There is one additional time to do boysenberry pruning. If, at any point during the year, you see canes that seem diseased, damaged, or broken, trim them out and throw them away.

Printer Friendly Version
Read more about Boysenberries
<PreviousNext>
Did you find this helpful? Share it with your friends!
FacebookTweetPinEmail
Related Articles
Newest Articles
You might also like…
Additional Help & Information