How To Plant Raspberries: Care Of Raspberry Plants 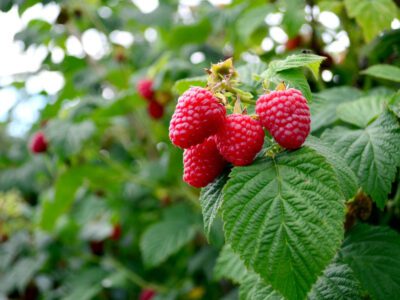 Growing raspberry bushes is a great way to make your own jellies and jams. Raspberries are high in Vitamin A and C, so not only do they taste great but they’re good for you as well.

How to Plant Raspberries

If you want to know how to grow raspberries, you should first know that raspberries ripen shortly after strawberries. They prefer a sandy loam soil that is rich in organic matter. The soil should be well drained and have a pH of about 5.8 to 6.5.

Growing raspberries bushes also prefer sunshine, so they should be planted in an area that gets six to eight hours of sun a day. When do you plant raspberries? You can plant them in the early spring.

Another aspect to consider when planting is not locating them within 300 feet (91 m.) of any wild blackberry bushes. You should also stay away from ground that has had tomatoes or potatoes growing in it within the past year or so. This is because wild blackberries, tomatoes, and potatoes are prone to the same sort of fungus that the raspberry bush is prone to, and this precaution prevents your raspberries from catching the fungus.

When growing raspberries, make sure the ground is kept free from weeds. Also, make sure you water the bushes regularly. You can use a straw mulch to help keep the weeds under control.

When you take care of raspberry plants, you want to fertilize them twice a year the first year you plant them. After that, you can fertilize your growing raspberry bushes annually. You will use 2 to 3 pounds (about 1 kg.) of 10-10-10 fertilizer per 100 foot (30 m.) of row. Scale that down if you are only planting a couple of bushes.

The care of raspberry plants sounds like a lot of work, but it’s really quite simple. You can train these bushes to grow along fences and even to climb up on trellises.

You will know your berries are ripe enough to eat when they are full of color. You can start sampling them daily until you get the right sweetness. Be sure to harvest your raspberries before the birds do!

Printer Friendly Version
Read more about Raspberries
Next>
Did you find this helpful? Share it with your friends!
FacebookTweetPinEmail
Related Articles
Newest Articles
You might also like…
Additional Help & Information