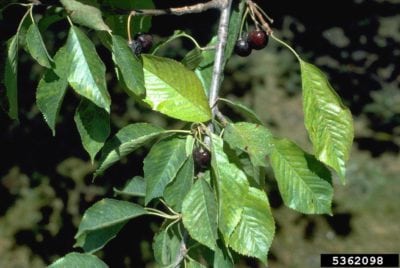 What is Cherry Rusty Mottle?

While experts have determined that rusty mottle diseases are caused by viruses, they do not have much other information. For example, scientists agree that your tree will get a rusty mottle cherry disease if you plant infected stock, but they don’t know how else the viruses are spread.

How can you tell if you have cherries with rusty mottle? Don’t look for your trees to die suddenly, because generally they won’t. They just lose energy.

Rusty mottle of cherry causes the cherry tree leaves to turn yellow or red. Many will drop before the fruit harvest. Those leaves that don’t drop turn rust colored, and are mottled with yellow and brown.

What about the fruit? Cherries with rusty mottle will be smaller than normal cherries of the same cultivar. They will ripen late and lack flavor. Some are totally tasteless.

If your tree has necrotic rusty mottle, you’ll see both flowers and leaves appear late in spring. The leaves will develop brown necrotic or rusty chlorotic spots. These may fall from the leaf leaving holes. The entire tree can lose its leaves.

Sadly, if your cherry tree has rusty mottle of cherry or necrotic rusty mottle, the best thing you can do is to remove it from your garden and dispose of it, as there is no effective treatment. You can buy virus-free trees to reduce your chances of having to deal with these viruses in the future.