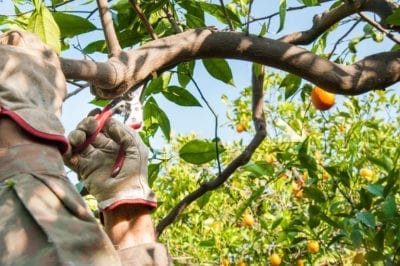 How and When to Prune Citrus Trees

Major citrus tree pruning, which controls the size of the tree, should be done after risk of freeze has passed but well in advance of summer heat. Otherwise, uncontrolled growth results in a tree that is less vigorous and uses water less efficiently.

You may need to prune the center of the tree if it is excessively dark and no fruit is produced in that area.

Maintenance pruning, which involves removal of dead or weak branches, as well as branches that rub or cross other branches, can be done any time of year. Removal of suckers should be done frequently – as often as once every month.

Water sprouts, also known as suckers, pop up frequently, especially during the first few years. It’s best to remove suckers as they appear; otherwise, they sap energy from the tree and the thorns make harvest difficult. If suckers produce fruit, it is usually bitter and unpalatable.

Experts advise removing water sprouts from the lower 10 to 12 inches (25.5-30.5 cm.) of the tree. Often, suckers are easily snapped off by hand and doing so won’t damage the tree. However, if you allow them to get too large, you’ll need a pair of hand pruners. Be sure the pruners are sharp so they create a clean, even cut.