The History Of Putting Oranges In Stockings For Christmas 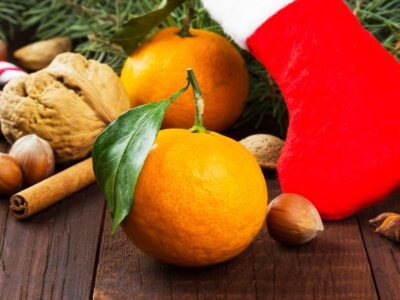 Around the 19th century, Christians began hanging stockings over the mantle or other handy spaces. These were filled with little goodies and often included an orange. In today’s consumer economy, such a humble item might be greeted with as much enthusiasm as a lump of coal. In yesteryear, the item was considered a delicacy and a much desired treasure. Reviving this tradition could help stretch the budget during the holidays and provide a delicious treat that might not be enjoyed every day.

The Christmas orange has generations of appearances. A child or adult finding an orange in Christmas stocking goodies may not be common today, but once was a treasured gift, especially for recipients in colder climes. Citrus was not common, and before modern transportation, it rarely made an appearance in groceries. Most citrus is ready to pick in winter, so it was in season. If one were lucky enough to get a hold of oranges or tangerines at Christmas, it was a special luxury for those living outside of the plant’s growing region.

There are many theories on the emergence of citrus in holiday stockings. One of the most ancient possibilities has to do with the legend of Saint Nicholas. This is the fellow we most commonly refer to as Father Christmas or Santa today. It was common once to provide a dowry for marriageable daughters. Without a dowry, a young woman was certain to remain a spinster. As the story goes, there were three poor young women who could not afford dowries. St. Nicholas threw three gold balls, which might mean gold bars or gold coins, in through the window at night. Apparently one landed in a stocking that was hanging to dry by the fire. From this, it became a tradition for adults to place gifts in stockings.

Why are Oranges Associated with Christmas

At one time, people were limited to foods grown in just their region. Since citrus requires plenty of sun and warmth, they were not produced in cooler areas. During the World Wars, citrus was not commonly shipped, and if there was a good crop, it would get shipped to the fighting men. Ration coupons generally didn’t cover such a luxury if the fruit could even be found. During the Depression, money was tight and only the bare necessities made it to most homes. So it was a real treasure when an orange appeared in the Christmas stocking. Even families with limited resources would often acquire the fruit to delight their children. In the early 1900s, oranges were heavily marketed. Their presence was becoming more broadly available, but they were more expensive than an apple or other common fruit. Leaving an orange in a stocking was a generous and extravagant gift.

Types of Citrus for Christmas Stockings

Home gardeners can grow their own citrus. Northern gardeners will have to select from dwarf trees that can be grown indoors during the cold season. Meyer lemon or a dwarf Campbell Valencia plant will produce after a few years in the home. Gardeners in warm regions with little frost have a huge choice of citrus plants. Oranges, limes, lemons, grapefruit, Satsuma, tangerines, and hybrids would all fit the bill for stocking stuffers. Satsumas and tangerines are the most cold hardy, while oranges and grapefruit will suffer severely in frosts. If an unusual citrus is desired, consider kumquat. Kumquats are eaten whole, including the peel. If truly interesting is the goal, find a Buddha’s Hand, a citrus often found at Asian markets.

Printer Friendly Version
Read more about Citrus Trees
<Previous
Did you find this helpful? Share it with your friends!
FacebookTweetPinEmail
Related Articles
Newest Articles
You might also like…
Additional Help & Information