Thorns On Citrus Trees: Why Does My Citrus Plant Have Thorns? 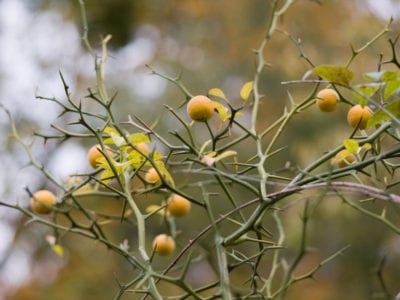 No, it’s not an anomaly; there are thorns on citrus trees. Although not well known, it is a fact that most, but not all citrus fruit trees have thorns. Let’s learn more about thorns on a citrus tree.

Citrus fruits fall into several categories such as:

All are members of the genus Citrus and many of the citrus trees have thorns on them. Classified as a member of the Citrus genus until 1915, at which time it was reclassified into the Fortunella genus, the sweet and tart kumquat is another citrus tree with thorns. Some of the most common citrus trees that sport thorns are Meyer lemon, most grapefruits, and key limes.

Thorns on citrus trees develop at the nodes, often sprouting on new grafts and fruiting wood. Some citrus trees with thorns outgrow them as the tree matures. If you own a citrus variety and have noticed these spiky protuberances on the branches, your question may be, “Why does my citrus plant have thorns?”

Why Does My Citrus Plant Have Thorns?

The presence of thorns on citrus trees has evolved for exactly the same reason that animals such as hedgehogs and porcupines sport prickly hides– protection from predators, specifically, hungry animals that want to nibble away at the tender leaves and fruit. Vegetation is most delicate when the tree is young. For this reason, while many juvenile citrus have thorns, mature specimens often do not. Of course, this may cause some difficulty for the cultivator since the thorns make it difficult to harvest the fruit.

Most true lemons have sharp thorns lining the twigs, although some hybrids are almost thorn-less, such as “Eureka.” The second most popular citrus fruit, the lime, also has thorns. Thorn-less cultivars are available, but supposedly lack flavor, are less productive, and are thus less desirable.

Over time, the popularity and cultivation of many oranges has led to thorn-less varieties or those with small, blunt thorns found only at the base of the leaves. However, there are still plenty of orange varieties that have large thorns, and generally those are bitter and less often consumed.

Grapefruit trees have short, flexible thorns found only on the twigs with “Marsh” the most sought after variety grown in the U.S. The little kumquat with its sweet, edible skin is primarily armed with thorns, like the “Hong Kong,” although others, such as “Meiwa,” are thorn-less or have small, minimally damaging spines.

While many citrus trees grow thorns at some point during their life cycle, pruning them away will not damage the tree. Mature trees usually grow thorns less frequently than newly grafted trees that still have tender foliage needing protection.

Fruit growers who graft trees should remove thorns from the rootstock when grafting. Most other casual gardeners can safely prune the thorns for safety’s sake without fear of damaging the tree.