What Are Dewberries: Tips For Growing Dewberry Plants 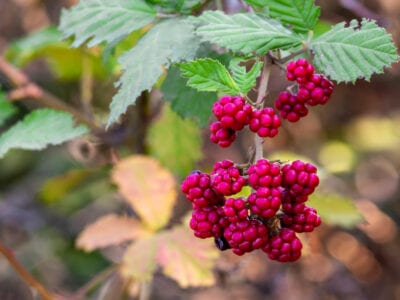 Living in the Pacific Northwest as I do, we often go berry picking in the latter part of summer. Our berry of choice, the blackberry, can be found poking out of the nooks and crannies of concrete highways, throughout the many green spaces of the city, and out in the suburbs. Similarly, growing dewberry plants abound in the eastern areas of Canada and the United States. So for those of us unfamiliar, “What are dewberries?” Keep reading to learn more.

To answer the question, “What are dewberries?” it’s helpful to look at the difference between dewberry and blackberry. While they are both trailing berry producing plants whose propensity for growth nears that of a weed, growing dewberry plants have a more shrub-like habit as opposed to the upright 3 to 6 foot (1-2 m.) vines of the blackberry.

The berries of dewberry plants are purplish red, similar to raspberries, and the seeds are much larger and tougher than those of the blackberry. The trailing habit of growing dewberry plants attains a height of only about 2 feet (61 cm.) or so and has slender thorns upon red-haired stems. While I harvest blackberries in the Pacific Northwest late in the summer, dewberries are ripe early in the spring, around late April to the first part of May.

Grown in the wild, dewberries tend to be slightly more acidic than blackberries and can be turned into jam or “deep pies” or even harvested for homeopathic remedies utilizing the leaves and roots of the plants.

When dewberry planting, you will want to keep in mind that these plants have large lateral growing root systems that spread and interconnect, creating a perennial thicket. So when you decide you want to add dewberry plants, consider the amount of space you will need and the plants potential invasiveness. Growing dewberry plants also propagate from both seed drop and rhizomes — just saying.

Dewberry plants can be obtained as seedlings or cuttings from the local nursery or from a wild patch of dewberries. Prepare the soil in the designated area, which should get several hours of direct sun each day.

Water around the planting until the soil is moist and add a layer of mulch around the base to retain moisture. Set up a trellis or train the dewberry planting to grow on a fence or the like, tying the branches with a piece of string or twist tie.

Very little is required to take care of dewberries. They are a hardy perennial that needs very little attention. You may want to fertilize growing dewberries once they have been established and have grown several inches (8 cm.), although these hardy plants do not require amending the soil.

Keep in mind that it takes four to five years for growing dewberry plants to mature enough to fruit.