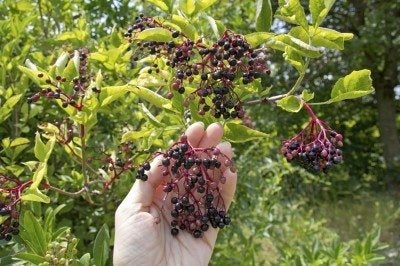 Native to North America, the elderberry is a deciduous, suckering shrub that is predominantly harvested for its tiny edible berries. These berries are cooked down and used in syrups, jams, preserves, pies, and even wine. It’s important to know when it is harvest time for elderberries, especially when making wine. Berries used for wine must be at their peak ripeness. So, when are the elderberries ripe? Read on to learn more.

Picking Elderberries and Other Info

Elderberries are easy to grow, non-invasive plants that are attractive additions to the landscape, especially with their cluster of large white flowers in the summer that turn into bunches of black edible berries. The plants are very hardy in USDA growing zone 4 but some varieties are suitable to zone 3. Elderberries flower in late June, so the crop is less susceptible to late spring frosts.

A subspecies of Sambucus nigra L., the European elderberry, the common elder or American elderberry is native to central and eastern United States and southeastern Canada. Elderberries are rich in vitamin C and contain more phosphorus and potassium than any other temperate fruit crop. Traditionally, not only the berries, but the roots, stems and flowers have also been utilized medicinally. Leaf extracts have been used as insect repellents and insecticides to treat fungal disease on plants, such as powdery mildew or leaf spot.

The berries are very tiny and borne in clusters (cymes), which make any mechanical harvesting of elderberry fruit very difficult. Because of this, and also because elderberries do not transport well, elderberries have little to no commercial production. So, you will just have to plant your own!

Elderberries thrive in moist, fertile, well-drained soil. They are tolerant of a wide variety of soil types; however, they prefer those with a pH of between 5.5-and 6.5. Plant elderberry plants in the spring, spacing plants 6-10 feet (2-3 m.) apart. Because elderberries have shallow root systems, it is important to keep them well watered for the first year until they are established. You can either purchase elderberries from a nursery or propagate your own plant from cuttings taken when the plant is dormant.

A small crop of elderberries will be produced in the plant’s first year, but the most productive harvest time for elderberries will be in their second year. This is because elderberries send up many new canes each year. The canes attain their full height within the first season and develop lateral branches in the second season. Flowers, hence fruit, are developed on the tips of the season’s growth, especially on the laterals. Therefore, second year elderberry canes are the most fruitful. By the third year, fruit production begins to wane, especially on elderberry that has not been pruned.

To retain the vigor of the plant, prune it annually. Remove any dead, broken or weak canes over three years of age in the early spring when the plant is dormant. Leave an equal number of one, two, and three year old canes.

Birds love the fruit as well, and it may be too late for harvesting elderberry fruit if you notice flocks of birds satiating themselves on your potential harvest. You may need to cover the plants with netting if you plan on a harvest for yourself.

So when are elderberries ripe? Elderberry harvest season generally occurs from mid-August to mid-September, depending upon your region and the cultivar. The clusters of berries ripen over a period of between five to 15 days. Once ripened, harvest the fruit and strip it from the cluster. Store the berries in the refrigerator and use as soon as possible. Production of elderberries on mature plants can range from 12-15 pounds (5.5-7 kg.) per plant and as much as 12,000 pounds (5443 kg.) per acre, plenty for both bird and human consumption.

Printer Friendly Version
Read more about Elderberries
<PreviousNext>
Did you find this helpful? Share it with your friends!
FacebookTweetPinEmail
Related Articles
Newest Articles
You might also like…
Additional Help & Information