What Is Dormant Oil: Information About Dormant Oil Sprays On Fruit Trees 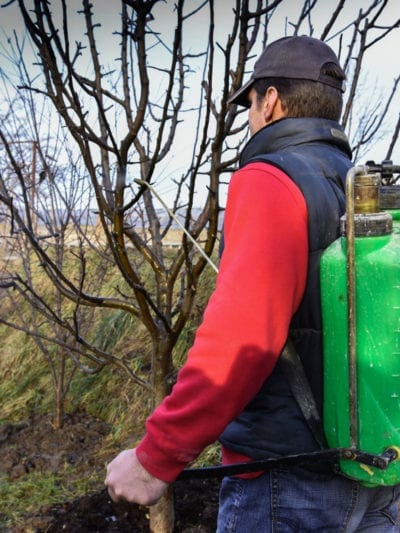 In late winter, your fruit trees may be dormant but your chores in the yard aren’t. Late winter and early spring, when the temperatures are barely above freezing, is the time to apply the best preventative for scale and mites: dormant oil.

Dormant oil sprays are used on fruit trees before the buds begin to swell and suffocate insects and their eggs nesting in branches. Using dormant oil on fruit trees doesn’t completely eliminate the problem with these pests, but it is the best way to cut off most of the population, leaving a simpler problem later in the season.

What is dormant oil? It’s an oil based product, typically petroleum but can also be vegetable oil based, especially designed for use on fruit trees. This oil has had surfactants mixed in to enable it to be mixed with water.

Once the oil solution is sprayed on all the branches of a fruit tree or bush, it penetrates into the surface of the insect’s hard outer shell and suffocates it by not allowing any oxygen to get through.

Apples, crabapples, plums, quince, and pears all benefit from dormant oil, as do gooseberry and currant bushes. Other fruit-bearing trees and bushes don’t have any need for spraying of dormant oils, as they don’t often harbor the same pests, but it won’t hurt to do so if desired.

How and When to Use Dormant Oil on Fruit Trees

To determine when to use dormant oil, look to your own weather. The date changes every year, but the conditions must be the same. Spray early enough so that the buds on the trees haven’t yet begun to swell. Wait until the daily temperature is at least 40 degrees F. (4 C.), and will stay that way for at least 24 hours. Finally, choose a 24-hour period when no rain or high winds are predicted.

Cover any annual flowers you may have near the tree when using dormant oil. While the weather is generally too cold yet for annual transplanting, if you are hardening off marigolds, snapdragons, and other flowers, remove them from the area, as dormant oil will kill them off with no chance of revival.

Fill your sprayer with the oil solution and slowly cover the tree, beginning with the topmost branches. Move all around the tree to get the spray into all the crevices.