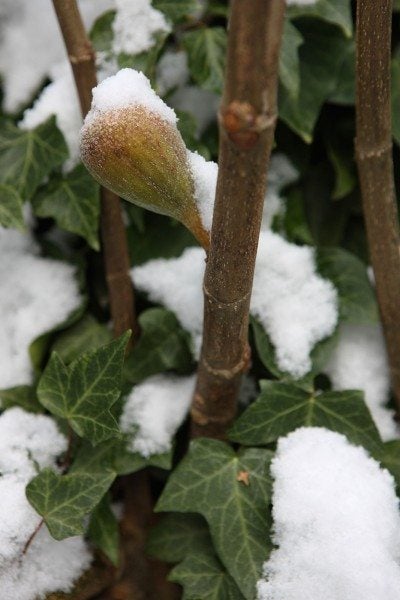 Most probably native to Asia, figs were spread throughout the Mediterranean. They are a member of the genus Ficus and in the family Moraceae, which contains 2,000 tropical and subtropical species. Both of these facts indicate that fig trees enjoy warmer temps and probably won’t do too well if you live in say, USDA zone 5. Fear not, fig lovers living in cool regions; there are some cold hardy fig varieties.

How Cold Hardy are Fig Trees?

So, just how cold hardy are fig trees? Well, you can cultivate cold hardy fig trees in areas where the minimum winter temperatures do not dip below 5 degrees F. (-15 C.). Keep in mind, though, that stem tissue can be damaged at temps well above 5 degrees F., especially if it is a prolonged cold snap.

Established or mature winter hardy figs are more likely to survive an extended cold snap. Young trees of less than two to five years old are likely to die back to the ground, especially if they have “wet feet” or roots.

Since figs thrive in warm regions, long periods of cold weather limit growth, ergo fruit set and production, and a lengthy freeze will kill them. Temperatures of -10 to -20 degrees F. (-23 to -26 C.) will definitely kill the fig tree. As mentioned, there are some cold hardy fig varieties, but again, keep in mind that even these will need some type of winter protection. Okay, so what are some winter hardy figs?

The three most common cold hardy fig varieties are Chicago, Celeste and English Brown Turkey. These are all also referred to as members of the Common Fig family. Common Figs are self-fertile and there are many, many varieties varying in taste color and growth habit.

Other cold hardy figs include but are not limited to the following:

While the three aforementioned fig varieties are the most common cold hardy figs grown, they are not necessarily the best cold hardy figs for your area. Taking into account a possible micro-climate, particularly in urban areas, a USDA zone may jump from a 6 to a 7, which would greatly broaden the number of varieties to grow in your area.

A little trial and error may be in order, as well as discussion with the local Extension office, Master Gardener or nursery to ascertain exactly which fig varieties are suited for your region. Whichever fig you choose, remember that all figs need full sun (a good six hours or more) and well-drained soil. Plant the tree against a protected south wall if possible. You may want to mulch around the base of the tree and or wrap it for protection during the coldest months. Alternatively, grow the tree in a container that can be moved into a protected area like the garage.

Any of the figs are gorgeous specimens to have and once established, are fairly drought tolerant and require little added care. They also have few pest or disease issues. The beautiful large-lobed leaves make a dramatic addition to the landscape and let’s not forget the heavenly fruit — up to 40 pounds (18 kg.) from a single mature tree!