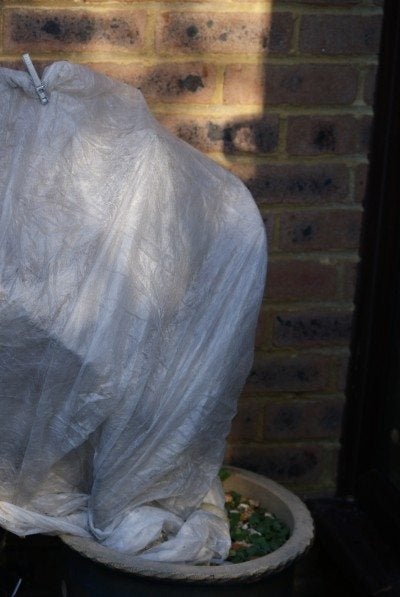 Archeologists have found carbonized remains of fig trees  aged between 11,400 and 11,200 years old, making the fig one of the first domesticated plants, possibly predating wheat and rye cultivation. Despite its historical longevity, this species is relatively delicate, and in some climates may require fig tree winter wrapping to survive the cold season.

Why Does a Fig Tree Need Cover for Winter?

The common fig, Ficus carica, is one of over 800 species of tropical and subtropical fig varieties in the genus Ficus. Found amongst this diverse group, one will find not only large trees, but trailing vine varieties as well.

Figs are native to the Middle East, but have been brought to all corners of the globe that can accommodate their habitat. Figs were first introduced to North America by early colonists. They can now be found in Virginia to California to New Jersey to Washington State. Many immigrants brought prized fig starts from the “old country” to their new homeland in the United States. As a result, fig trees can be found in urban and suburban backyards in many USDA growing zones.

Because of these diverse climatic growing areas, a fig tree cover or wrap for winter is often a necessity. Fig trees are tolerant of mild freezing temperatures, but extreme cold may kill the tree or damage it irreparably. Remember, the species heralds from tropical and subtropical regions.

How to Wrap Fig Trees

To protect a fig tree from cold winter temps, some people grow them in pots that can be moved into an indoor area to over winter, while others undertake wrapping the fig tree for winter. This can be as simple as wrapping a fig tree in some type of covering, to folding the entire tree down into a trench and then covering it with soil or mulch. The last method is pretty extreme, and in most cases a fig tree winter wrapping is sufficient to protect the plant during the winter months.

Begin to consider wrapping a fig tree in the late autumn. Of course, this depends on where you live, but the basic rule is to wrap the tree after it has been exposed to a freeze and has lost its leaves. If you wrap the fig too early, the tree may mildew.

Before wrapping the fig tree for winter, prune the tree so it is easier to wrap. Choose three to four trunks and cut all others back. This will give you a good open canopy that will allow sun to penetrate for the next growing season. Next, tie the remaining branches together with organic twine.

Now it is time to wrap the tree. You can use an old piece of carpet, old blankets or a large piece of fiberglass insulation. Drape this winter fig tree cover with a tarp, but don’t use a black or clear plastic, which may result in too much heat building up inside the cover on sunny days. The tarp should have some small holes in it to allow heat to escape. Tie the tarp with some heavy cord.

Keep an eye on the temperature later in winter and earliest spring. You don’t want to keep the fig tree wrapping for winter on when it starts to warm up. When you unwrap the fig in the spring, there may be some brown tips, but these can be pruned with no damage to the tree.