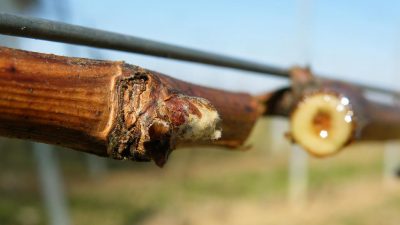 Grapevines are often pruned in the early spring prior to bud break. A somewhat surprising result might be what looks like a grapevine dripping water. Sometimes, grapes leaking water appear cloudy or even mucus-like, and sometimes, it really does look like the grapevine is dripping water. This phenomenon is natural and is referred to as grapevine bleeding. Read on to find out about bleeding in grapes.

Help, My Grapevine is Dripping Water!

Grapevine bleeding may happen at any time during active growth, usually when heavy pruning has been done. As soil temps reach 45-48 degrees F. (7-8 C.), root growth surges, leading to a jump in xylem activity. Xylem is the woody support tissue that carries water and minerals from the root systems through the stem and into the leaves.

Bleeding in grapes usually only occurs during the dormant period of growth if there is plenty of water available to the roots. If it has been a dry year, the vines often don’t bleed when pruned.

So what is happening when grapes are leaking this water-like substance? The grapevine is drawing water, and as this water pushes against the newly cut surfaces that have not yet been callused, it oozes from there. The bleeding sap can last up to two weeks.

Is there any danger to a grapevine leaking like this? Some suggest that low concentrations of minerals and sugars are leaking out, which are vital to the vine’s frost protection. So, if the vine loses this frost protection, it could be at risk in the advent of further frosts. Also, grapevine bleeding can affect field grafts done in the spring.

Proper pruning techniques can reduce or divert bleeding. The idea is to prevent the sap from oozing down the canes and “drowning” vital buds or graft sites. To protect the buds, cut the wood at a slight angle to create an area where the water can run between the buds below. In the case of protecting a graft site, cut at the base of the vine on either side to divert the bleeding from the graft site to the trunk base. Or bend long canes slightly downward to ease draining.