Grapevine Won’t Produce: How To Get Grapes On Vines

Grapes
By: Becca Badgett, Co-author of How to Grow an EMERGENCY Garden
Printer Friendly Version 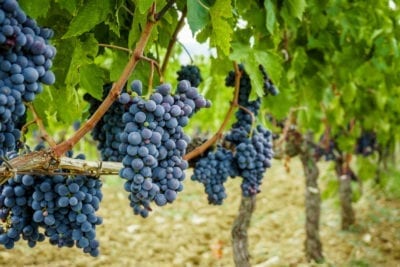 You’re so excited to start harvesting your grapes, but there are none on the vine. Perhaps, you planted them last year, fed and pruned as you thought was needed and, still, there are no grapes on the grapevine. After a close look, you find a couple of small, underdeveloped clumps near the bottom. Or maybe you’ve moved to a new location with vines already covering the fence, but your grapevine isn’t fruiting. What a disappointment to find your grapevine won’t produce. Let’s take a look at some reasons this might happen and learn how to get grapes on vines.

Why are There No Grapes?

Vine is too young: In general, your vine will not produce grapes until it is at least three years old. Clusters form on stem growth from the previous year, two-year wood, every year.

Too much fertilizer: If you’ve given your grapevine too much nitrogen fertilizer, this can result in lush growth of the foliage and no fruit. This also happens if there is too much nitrogen in the soil. If you believe this is the reason there are no grapes on your vine, do things differently next year. Fertilize your grapes in the future with a product high in phosphorus, the middle number on the fertilizer ratio, such as 10/20/10. Do a soil test to determine what is needed, if possible. Your vines may only need a light feeding of compost tea and mulch during winter.

Not enough sunlight from improper pruning: Grapevines need full sun, all over, for a full harvest. Overgrown and unpruned tops block sunlight from reaching areas of the vine. Prune properly for the sun to reach the vine and to promote good air circulation. Remove old wood that is more than two years old. In most areas, prune grapevines during dormancy, usually in late winter. Remove all but four canes on the first pruning and keep them trimmed back thereafter. New growth develops on one-year-old wood, so these canes benefit from full sun especially. Older branches don’t fruit. Prune hard on older vines.

Pest and disease: Borers and beetles, along with other pests, sometimes attack the grapevine. Hand pick small numbers and put them in a bucket of soapy water. Prune off infested branches. If it appears you have a heavy insect infestation, spray with a horticulture soap product. A fungal disease, such a powdery mildew and botrytis bunch rot, may also affect the vines. Proper pruning allows good air circulation to discourage these issues. Water your vines at the root, keeping foliage and branches dry, to help avoid them as well.