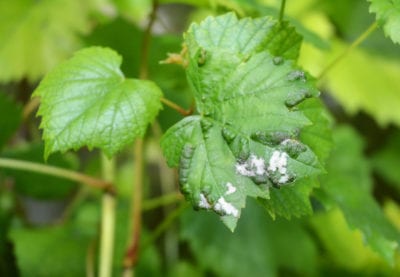 Grape powdery mildew is caused by the fungal pathogen Uncinula necator. While it was previously believed that this fungal pathogen over wintered on buds, recent studies indicate that it actually overwinters in cracks and crevices on the grape’s bark. In spring, when temperatures range steadily above 50°F. (10°C.), the fungus becomes active and spores stick to plant tissues that are damp from spring rain or dew.

Usually, the first grape powdery mildew symptoms are light chlorotic spots on the foliage. This symptom often goes unnoticed. Shortly after, white to light gray, slightly fuzzy or woolly patches will appear on both the under and upper sides of the foliage. These patches will merge into much larger patches.

Powdery mildew can affect any green tissues of the plant. Infected foliage may be distorted, stunted and drop from the plant. When flower or fruit clusters are infected, the same white patches will develop and flowers or fruit will drop prematurely. White patches may even develop on the grapes.

When treating powdery mildew on grapes, prevention is always the best defense. Keep grapevines trimmed and trained to promote air circulation all around and throughout the plant.

Also, planting grapes in full sun rather than part shade can reduce a lot of fungal and issues. Keep the area around grape plants free of garden debris and weeds. Keeping your gardening tools clean and sanitized prevents the spread of many plant diseases too.

Powdery mildew can effectively be treated by fungicides if the timing and conditions of application are right. A regiment of preventative fungicides, labeled for powdery mildew on edibles, can be started in early spring and reapplied every 7-14 days until the grape plant begins to bloom. After blooms open, only light fungicidal summer oils may have any effectiveness against the disease, but usually fungicide application is a waste in mid to late summer.