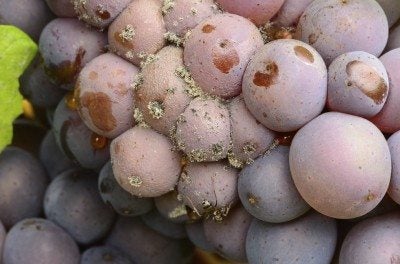 Rich, elegant bunches of grapes hanging in clusters are an idyllic vision, but not one that every grape grower gets to experience. Grape growing isn’t for the faint of heart, but if you’re willing to take on the challenge, it’s best to know your enemy. Summer bunch rot, also known as grape sour rot, can be a serious problem in grapes, damaging fruits and creating a huge mess for growers of both decorative and fruiting vines.

What is Summer Bunch Rot?

Summer bunch rot in grapes is a fairly common fungal infection caused by a number of different pathogens, including Botrytis cinerea, Aspergillus niger, and Alternaria tenuis. Due to the wide variety of pathogens involved, bunch rot of grapes can affect plants in almost any grape-growing climate, although it universally appears as fruits are ripening in the summer.

Once the sugar content is above eight percent, grapes become susceptible to grape sour rot. The pathogens that cause this disease are relatively weak though, and require injury to the grape’s skin before they can enter the fruit and begin multiplying. Bunch rot is much more common in tightly clustered grapes, where it can easily spread from fruit to fruit, but can appear in loosely clustered fruits as well.

Summer bunch rot in grapes appears as a few damaged berries in a cluster, which soon collapse and rot. There may be black, white, green, or gray spores, but these don’t occur with all pathogen species. Once the initial infected berries collapse, the pathogen spreads rapidly through the bunch, causing widespread rotting and a distinct and unpleasant vinegar odor to develop.

Fungicides are generally ineffective when it comes to controlling summer bunch rot, but if you can keep powdery mildew killed back and open your grape canopy enough to reduce the humidity, you’ll have a fighting chance at defeating this fungal pest. Protect your grapes from birds and insects that may damage the grape surfaces with bird netting or fencing and a floating row cover.

If you see any grapes that are already showing signs of summer bunch rot, remove them immediately and destroy the infected tissues. Growers who are primarily interested in growing grapes as an ornamental vine should remove young bunches as early as possible to keep the vine healthy and vigorous.