Kiwi Pruning: How Do You Trim A Kiwi Plant 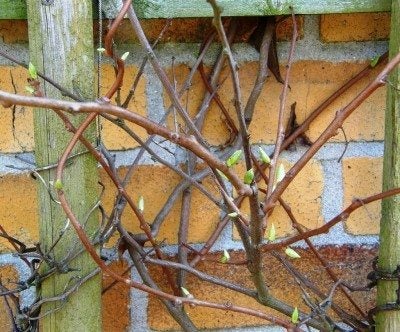 Kiwi is a vigorous vine that quickly grows out of control if not grown on a solid supporting structure and pruned regularly. Proper pruning not only controls the size of the plant, but also increases the yield, so knowing how to cut a kiwi vine is an essential part of growing kiwi fruit. Read more about kiwi plant care and pruning kiwi vine.

In addition to kiwi pruning, your vines will require additional kiwi plant care. Many kiwi vines die in the first year because the soil is too wet. Water deeply in the absence of rain, and allow the soil around the crown to dry out before watering again.

Kiwi plants are sensitive to fertilizers, so use them in small amounts. Fertilize them the first year with a light scattering of fertilizer around the base of the plant monthly from spring until midsummer. After the first year, increase the amount slightly and fertilize every other month.

Female kiwi plants produce fruit, but they need a male nearby to fertilize the flowers. Choose males and females of the same variety or cultivar because the vines have to come into flower at the same time. One male is sufficient for eight females.

A good trellis for a kiwi vine is an essential part of kiwi plant care. An adequate support structure should look like an old-fashioned clothesline. You’ll need at least two 4 to 6 inch (10-15 cm.) diameter posts, installed so that you have 6 feet (2 m.) of post above ground. Install the posts 15 to 18 feet (4.5-5.5 m.) apart. Top each post with a cross bar about 5 feet (1.5 m.) long. String three wires between the crossbars, one at the center and one at each end.

Kiwi pruning and training begins when you plant the vine. For the first year, you should focus more on straight growth and a strong framework rather than how to cut a kiwi. Tie the vine loosely to the post and keep it growing straight upward. Don’t allow it to twirl around the post. Remove all side branches until the vine reaches the top of the post. Cut out the top of the vine a few inches (8 cm.) below the top of the post and encourage side shoots that grow laterally along the wires.

Winter is the best time for pruning kiwi vine side branches along the wires. Cut them back to a point where the stems are about 1/4 inch (6 mm.) in diameter. If the vine didn’t form good side branches at the top, cut the main trunk back by about 2 feet (61 cm.) and try again next year.

How Do You Trim a Kiwi Plant After the First Year?

After the first year, focus on building strong lateral growth along the wires. Lead the branches near the top of the vine to the wires and fasten them in place every 18 to 24 inches (46-61 cm.). Cut the vine to keep it from extending beyond the wires. Remove shoots that are twisting around other shoots or taking off in the wrong direction.