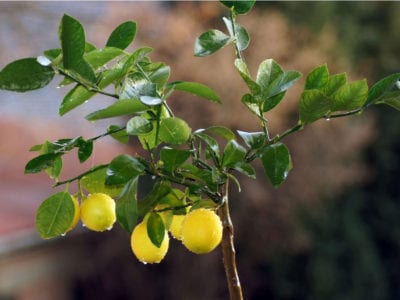 Citrus trees are susceptible to a plethora of problems caused by pests, diseases, and nutritional deficiencies, not to mention environmental stressors. Causes of lemon leaf problems are in the realm of “all of the above.” As with most leaf drop in citrus, treatment of leaf loss in lemons means narrowing the field of possibilities.

Cold damage and improper watering, namely watering too much, are common environmental conditions that may lead to leaf drop on lemon plants.

Cold damage – Citrus trees in general do not like cold or freezing temperatures. Hardier varieties are available, but cold damage, such as lemon tree winter leaf drop, is likely when temps drop to 28 degrees F. (-2 C.) for four hours or longer. If temps drop below 32 degrees F. (0 C.), it’s best to protect young trees (under five years) by covering them or moving to a protected area. Water the plant, if possible, 48 hours prior to the freeze and postpone pruning until spring since newly pruned trees are more susceptible to prevent lemon tree winter leaf drop.

Overwatering – If your lemon tree is dropping leaves, another common reason may be overwatering. When roots of the tree sit in water, they have a tendency to develop root rot, which in turn results in the lemon tree dropping leaves. Mulch around the root area, minimize irrigation, plant in well draining soil, and keep grass away from the base of the tree to avoid root rot and its accompanying problems.

Sixteen nutrients are necessary for the growth of plants and trees, and depletion of any one of these may cause serious issues such as lemon tree leaf drop. Depletions of nitrogen, magnesium, iron, zinc, and manganese may all play a hand in causing lemon tree leaf drop as well as reduction in size and general production of fruit.

To maintain healthy trees, fertilize citrus every six weeks when the tree is under seven years old with a good citrus fertilizer — not fertilizer tree spikes. Adult trees should be fertilized often but in small amounts from October through February.

Some lemon leaf diseases that result in yellowing, dieback, and defoliation are: alternaria brown spot, greasy spot, and phytophthora.

Alternaria leaf spot – Alternaria brown spot not only yellows leaves, but produces blackening of leaf veins with fruit that has sunken black to brown spots with yellow halos, resulting in fruit drop. Disease resistant varieties should be planted and spaced apart to promote rapid drying of the canopy.

Copper fungicides can be sprayed when the spring flush leaves are half expanded and then again when fully open. Another spray should occur four weeks later. Dependent on the amount of spring precipitation, applications should be done every two to four weeks from April through June.

Greasy spot fungus – The fungal spores of greasy spot fungus first appear as yellow spots on the top side of the leaf, becoming oddly shaped brown blisters with a greasy appearance on lower and upper surfaces. Leaf drop decreases fruit set and increases the chance of damage to the tree from cold or pests.

Again, spraying with a copper fungicide, being sure to cover the underside of the leaves, will aid in eradicating the disease. Spray for the first time in May to June and then spray again in July to August.

Improving drainage and irrigating in the morning will aid in elimination of phytophthora as will keeping the area around the tree free from grass, weeds, other debris, and mulch.

Other Causes of Lemon Leaf Problems

A number of pests may also be responsible for lemon tree leaf drop. Asian citrus psyllid produces honeydew, which leads to sooty mold as well as causing damage and leaf drop due to the feeding on of the young citrus leaves. Oil sprays can control this pest when applied frequently.

Citrus leaf miners are also an intrepid pest assailing lemon tree leaves. Barely noticeable to the naked eye, leaf miners are not easy to control with chemicals since they are burrowed into their dens between leaf and stem. Infected areas of the tree should be removed and destroyed to aid in management of the insects. Introduction of a predatory wasp has also been seen as a successful suppressor of the leaf miner population.

Printer Friendly Version
Read more about Lemon Trees
<PreviousNext>
Did you find this helpful? Share it with your friends!
FacebookTweetPinEmail
Related Articles
Newest Articles
You might also like…
Additional Help & Information