Loganberry Plant Info: How To Grow Loganberries In The Garden 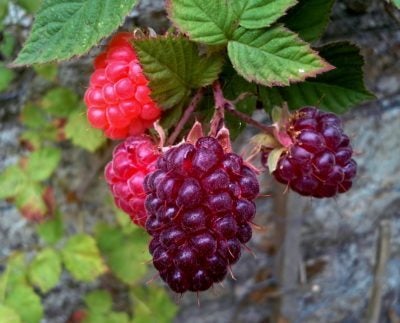 The loganberry is a blackberry-raspberry hybrid discovered somewhat by accident in the 19th century. Since then, it has become a mainstay in the U.S. Pacific Northwest. Combining the flavors and qualities of its two parents while also exhibiting its own special characteristics, the loganberry is a worthwhile addition to the garden, provided you have the right growing environment. Keep reading to learn more about loganberry plant care and how to grow loganberries at home.

Loganberries (Rubus x loganobaccus) were first developed in 1880 when horticulturalist James Harvey Logan was trying to breed a new variety of blackberry. By accident, he wound up producing a hybrid between his Red Antwerp raspberry and his Aughinburg blackberry plants. The result was the loganberry, which has since come to bear his name.

Loganberries are notable for their long-trailing canes, their early staggered ripening, and their thornless stems (though some varieties do have thorns). Loganberry fruit is deep red to purple in color like a raspberry, retains its core like a blackberry, and tastes like something in between the two. The fruits are tasty and versatile, frequently used for jams and syrups. They can be used in any recipe that calls for raspberries or blackberries.

How to Grow Loganberries

Loganberries are most popular in the states of Washington and Oregon, and this is largely due to their growing requirements. The plants are extremely sensitive to both drought and cold, which makes growing loganberries in most parts of the world a tricky business.

The Pacific Northwest provides a climate that is just right. As long as you’re growing in the right climate, loganberry plant care is relatively easy. The canes are very trailing, which means they need trellised support to keep them from crawling across the ground.

They prefer fertile, well-draining, loamy soil and full sun. The fruits will ripen gradually and can be harvested throughout the summer.