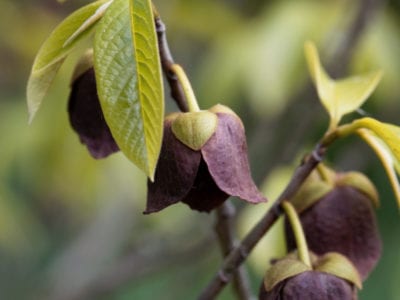 Pawpaw is a deciduous tree that is the only member of the tropical Annonaceae family. It is the largest edible fruit tree native to the United States. It is the exclusive larval host for the beautiful zebra swallowtail, and while it has few pests in general, it is susceptible to some common pawpaw pests. Treating pawpaw tree pests is reliant on identifying pawpaw pest symptoms. Read on to find out about insects that eat pawpaws and pawpaw pest treatment.

About Insects that Eat Pawpaws

Also known as the Indiana banana, hoosier banana, and poor man’s banana, the pawpaw (Asimina triloba) grows naturally in rich, fertile, river bottom soils as understory shrubs. The plant is hardy in USDA zones 5 through 8 and grows in 25/26 of the eastern states of the US. As a slow growing tree, pawpaws need several years of growth before they produce fruit.

Flowers bloom between March and May depending upon weather and cultivar. The stunning blossoms are around 2 inches (5 cm.) across and dangle upside down in a crimson profusion in the axils of the previous year’s leaves. The blooms contain several ovaries and are, thus, capable of producing several fruits. Pawpaws are the largest fruit native to America, with the largest, depending upon cultivar, weighing up to a pound (0.5 kg.)!

As mentioned, zebra swallowtail larvae feed on the leaves of the pawpaw exclusively. Rarely, however, do they do so in such numbers as to affect fruit production or the health of the tree.

The most damaging of the pests attracted to pawpaws is the pawpaw peduncle borer, Talponia plummeriana. The symptoms of this pawpaw pest appear at the blooms of the plant. The larvae feed on the fleshy areas of the blossoms resulting in flower drop, thus lack of fruit.

Papaya fruit flies attack pawpaws in Florida, and pawpaw whiteflies attack in Venezuela. Spider mites are also attracted to the tree, as are several closely related species of hornworm. Many types of caterpillars, including saddlebacks, also feed on the tree’s leaves. Japanese beetles occasionally damage leaves as well.

If you consider them pests, mammals such as raccoons, squirrels, foxes, and mice all like to munch on pawpaw fruit. Other animals such as deer, rabbits, and goats, however, will not feed on the leaves and twigs.

The most common signs that a pawpaw tree is being attacked by pests are chewed leaves, leaf loss, and yellowing.

Pawpaw plants produce natural compounds in their leaf, bark, and twig tissue that has high anti-pesticidal properties. It is because of this natural defense, and because pests that are attracted to the plant rarely do significant damage, treating pawpaw pests is generally unnecessary.