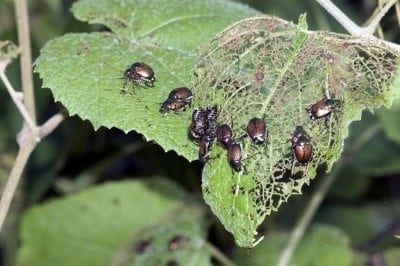 Considered as one of the most devastating insect pests, especially in eastern parts of the United States, Japanese beetles love to feed on garden plants. Let’s look at how get rid of Japanese beetles.

When is Japanese Beetle Season?

Usually feeding in groups, Japanese beetles are most active during warm, sunny days. In fact, once the adults emerge from the ground in spring, they immediately begin feasting on whatever plants are available. This activity can take place for a month or two throughout summer.

Damage can be recognized as a lacy or skeletonized appearance of the leaves. In addition, their young can be just as devastating. Grub worms commonly feed on the roots of grasses and seedlings.

How to Get Rid of Japanese Beetles

It can be very difficult to rid the garden of Japanese beetles, especially once their numbers have grown. The best defense when combating these pests is through prevention and early detection. You can improve your chances of avoiding Japanese beetles by learning about their favorite weed plants and then removing them from your property. Examples include:

Keeping plants healthy is another way to prevent Japanese beetle attacks, as they are attracted to the scent of ripening or diseased fruits. If you do happen to have an outbreak, simply pick them off plants or gently shake them off in the early morning. Place them into a bucket of soapy water.

Covering your precious plants with netting during peak season also helps. The use of homemade insecticidal soap or castor oil soap is another Japanese beetle home remedy worth trying.

If all else fails, look towards eradicating their young larva or grubs, which eventually become Japanese beetles. Treat the soil in your lawn and garden with Bt (Bacillus thuringiensis) or milky spore. Both are natural bacteria that target grubs and eradicate future problems with Japanese beetle pests.