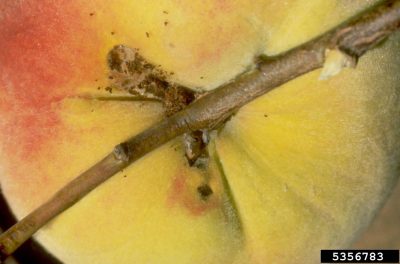 Peach twig borers are the larvae of plain-looking gray moths. They damage new growth by boring into the twigs, and, later in the season, they bore into the fruit. Find out how to manage these destructive pests in this article.

What are Peach Twig Borers?

Peach twig borers have two to five generations every year, depending on the climate where you live. The larvae overwinter under the tree bark, and then make their way to emerging shoots in late winter. They tunnel in and feed until they are mature enough to pupate. Later generations tunnel into the stem end of the fruit.

Crevices in the bark provide hiding places for the larvae to pupate. The adults are plain gray moths that begin laying eggs on the undersides of leaves right away. The generations often overlap so that you can find several life stages in the tree at the same time.

Damage from peach twig borers is quite serious on young trees. The insects can kill an entire season of new growth by feeding on the twig tips. Later generations disfigure the fruit and render it inedible.

The good news is that trees generally recover once the insect is gone. Young trees may experience a setback, but there is no reason they can’t produce a crop in future seasons.