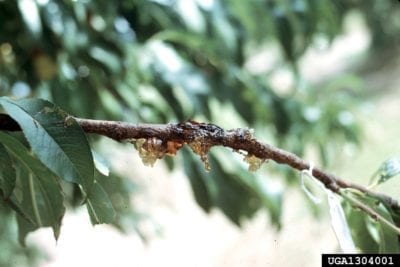 Gummosis is a disease that affects many fruit trees, including peach trees, and takes its name from the gummy substance that oozes from infection sites. Healthy trees can survive this infection, so provide your peach trees with the water and nutrients they need and take steps to prevent the spread of the fungus to prevent and manage infection.

This is a fungal disease caused by Botryosphaeria dothidea. The fungus is the infecting agent, but the illness occurs when there are injuries to the peach tree. There can be biological causes of injuries, like the bore holes of peach tree borers. Injuries that lead to fungal gummosis of peach can also be physical, such as those caused by pruning. The infection may also get into the tree through its natural lenticels.

The fungus overwinters in the parts of a tree that are infected as well as in dead wood and debris on the ground. The spores can then be splashed onto healthy parts of a tree or onto other trees by rain, wind, and irrigation.

Symptoms of Peaches with Fungal Gummosis

The earliest signs of fungal gummosis of peach are the small spots on new bark that ooze resin. These are usually found around the tree’s lenticels. Over time the fungus on these spots kills tree tissue, resulting in a sunken area. The oldest sites of infection are very gummy and may even merge together to become larger, sunken spots with gummy resin.

On a tree that has been infected for an extended period of time, the diseased bark begins to peel. The peeling bark often remains attached at one or two points, so the tree develops a rough, shaggy appearance and texture.

Because the fungus overwinters and spreads from dead and infected debris, it is important for control of the disease to include cleaning up and destroying of all diseased and dead wood and bark. And, because peach gummosis fungus infects wounds, good peach pruning practices are important. Dead wood should be trimmed off and cuts should be made just past the collar on a branch base. Avoid pruning in summer when wounds are more vulnerable to infection.

There is no good way to treat this fungal disease with fungicide, but when healthy trees are infected they can recover. Use good hygiene methods to prevent the spread of the fungus and provide plenty of water and nutrients to prevent affected trees from being stressed. The healthier the tree is, the more able it is to recover from the infection.