What Is A Shinseiki Pear – Tips For Growing Shinseiki Asian Pears 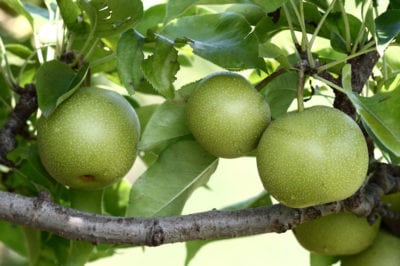 Shinseiki pear trees make a great addition to the home garden or small orchard. They grow in a pleasing shape, have pretty spring blooms, and produce fruit abundantly. These apple-like pears are firm and crisp, less juicy that European pears, and delightfully sweet.

What is a Shinseiki Pear?

Shinseiki, also called New Century, is a variety of Asian pear. Asian pears are true pears, but they are significantly different from European pears. Most noticeably, they lack the typical pear shape and are round, more like apples. The flesh is also firmer and crisper, also reminiscent of apples. They are less juicy than European pears and are best for fresh eating and cooking.

By growing Shinseiki Asian pears, you’ll get a large harvest of fruit. This is an abundant producer with six- or seven-year-old trees giving an annual harvest of 500 or more pears. This is a great home orchard tree because it isn’t very large, growing eight to ten feet (2.5 to 3 m.) tall. It also provides visual interest, shade, and profuse white spring blossoms.

How to Grow a Shinseiki Asian Pear

Growing Shinseiki Asian pears is a good choice if you want a lot of fruit and something a little different. If you like the flavors of pears but the texture of apples, this is the fruit tree for you. Like other pear trees, Shinseiki will do best in full sun and with soil that tends toward loamy and drains well. Root rot can be an issue, so it’s crucial to avoid standing water.

Shinseiki pears can be grown in zones 5 through 9 and may tolerate temperatures as cold as -20 degrees Fahrenheit (-29 Celsius), especially if grafted to a hardy rootstock.

Pruning each year in the dormant season is important, but flower thinning can also help with fruit production. Shinseiki tends to over produce flowers, so thin out a few buds on each cluster in the spring.

The timing for Shinseiki Asian pear harvest varies a little bit by location, but is generally in mid- to late-summer. Unlike European pears, these should be harvested when they are ripe. Asian pears are firm, even when ripe, but they will give a little under the pressure of your fingers when ready to pick.