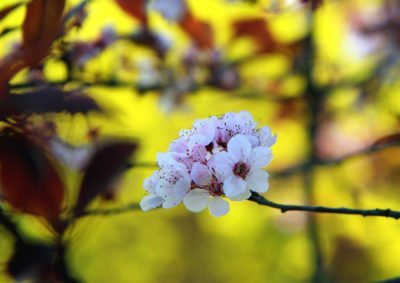 Newport plum trees (Prunus cerasifera ‘Newportii’) provide several seasons of interest as well as food for small mammals and birds. This hybrid ornamental plum is a common sidewalk and street tree due to its ease of maintenance and ornamental beauty. The plant is native to Asia but many cooler to temperate regions of North America are suitable for growing Newport plum. What is a Newport plum? Continue reading for a description and cultural tips on this pretty tree.

What is a Newport Plum?

While Newport plum does produce some fruits, they are considered of minimal palatability to humans. However, birds, squirrels, and other animals utilize them as an important food source. It is a medium-sized tree useful in containers, as bonsai, or standalone specimens. The tree has a slow to moderate growth rate making it perfect as an urban shade plant.

Newport plum trees are often used as ornamental shade plants. It is a deciduous tree that grows 15 to 20 feet (4.5 to 6 m.) tall with spectacular purple-bronze foliage. Springtime brings sweet, little, purplish-pink blossoms and lovely, purple drupes form in summer. Even once the leaves and fruits are gone, the upright, vase-like form of the branches creates an attractive scene when covered in winter’s snowy glory.

Newport plum care is minimal once established. The plant is useful in United States Department of Agriculture zones 4 to 7 and has excellent winter hardiness.

How to Grow a Newport Plum

The ornamental plum requires full sun and well-draining, acidic soil. Moderately alkaline soils are fine too, but leaf color may be compromised.

Newport plum trees like quite a bit of rainfall and moist soil. It has some short term drought tolerance once established and can withstand sea spray.

During the spring, bees will flock to the tree’s blooms and during late summer to fall, birds feast on the handing or dropped fruits.

The most common method of growing Newport plum is from cuttings, although seed grown trees are possible with some variation of form from the parent.

This is a relatively easy tree to care for provided it is situated in moist, well-draining soil. The biggest issues are fruit and leaf drop, and some pruning may be necessary to shape the tree and keep a strong scaffold. The branches are not particularly fragile, but removal of any damaged or broken plant material should be done in late winter to early spring.

Unfortunately, the plant seems susceptible to several species of borers. Watch for signs of frass and use appropriate pesticides when necessary. Aphids, scale, Japanese beetles, and tent caterpillars may also be a problem. Disease problems are generally confined to fungal leaf spots and cankers.