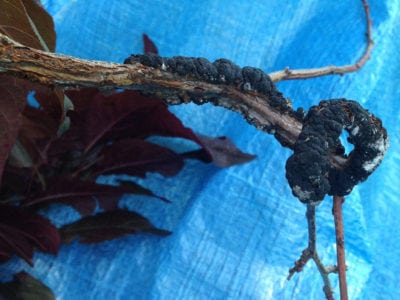 Plum black knot disease is named for the warty black growths that appear on the branches and shoots of the fruit trees. Black knot on plum trees is quite common in this country and can affect both wild and cultivated trees. If you have plums or cherries in your home orchard, you need to know how to identify this disease and how to treat plum black knot. Read on to learn more about plum black knot control.

Plum black knot disease is a nightmare for gardeners, since it can easily result in the death of plum and cherry trees. It is caused by a fungus called Apiosporina morbosa or Dibotryon morbosum.

Most cultivated plum trees are susceptible to black knot, including American, Japanese, and European plum tree species. The popular cultivars Stanley and Damson are very susceptible. You also see ornamental cherries and plums with black knot.

Symptoms of Plums with Black Knot

So how can you tell if your plum has black knot? The principal symptoms are rough black swellings or knots that appear on the woody portions of the tree, usually small twigs and branches.

The knots grow longer and wider until they encircle the branch. Initially soft, the knots harden over time and turn from green to brown to black. Plums with black rot lose branches as the knots cut off the water and food supply, and eventually the disease can kill the entire tree.

If you are wondering how to treat plum black knot, the first step is to catch it early. If you become aware of black knot disease when it first develops, you may be able to save the tree. The spores that spread the fungus are released from mature knots in spring when it rains, so removing the knots in winter prevents further infestation.

The knots may be difficult to see while a tree is covered with leaves, but in winter, they are obvious. Plum black knot control starts in the winter when the trees are bare. Search each tree for knots. If you find any, prune the branches out, making the cut 6 inches (15 cm.) into healthy wood. If you find black knot on plum branches you cannot remove, scrape off the knots and the wood under it. Cut it away ½ inch (1.5 cm.) into healthy wood.

Fungicides can help protect your plum trees, although they cannot cure a severe infection of black knot on plums. Use a protectant fungicide if your plum is among the more susceptible varieties like Stanley, Damson, Shropshire, and Bluefre.

Spray the fungicide in spring when the buds begin to swell. Wait for a warm, rainy days when the tree leaves are wet for at least six hours. Reapply the fungicide every week during periods of heavy rain.