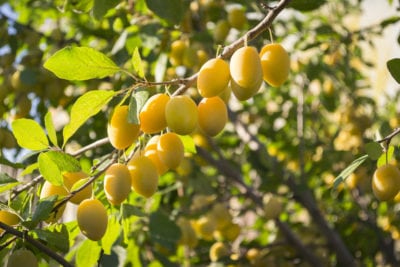 Like many aspects of gardening, planning for and planting fruit trees at home is an exciting endeavor. Variation in use, color, texture, and taste offered by different cultivars of fruit trees make the choice an extremely difficult task for growers. Coming in colors ranging from dark purple to pale yellow, plums are no exception to this rule. One such plum tree, called ‘Yellow Egg,’ is praised for its use in preserves, baked goods, as well as fresh eating.

What is a Yellow Egg Plum?

According to its namesake, Yellow Egg plums are a type of yellow egg-shaped European plum. Known for being somewhat smaller, European plums are a great addition to home orchards for their fresh eating qualities when allowed to fully ripen as well as their use in pies, tarts, and various savory recipes. Thriving in USDA growing zones 5 through 9, gardeners are able to reap large harvests of these sweet freestone plums.

Due to the uncommon availability of this plant in some areas, finding Yellow Egg plum saplings locally at garden centers or plant nurseries may be somewhat difficult. Luckily, the trees are frequently found for sale online. If ordering online, always make certain to order only from reputable sources, as to ensure healthy and disease-free plants. This is especially important as some varieties experience susceptibility to canker.

Also known as the ‘Pershore Egg,’ Yellow Egg plum trees are grown much like other types of plum. Choose a well-draining planting location which receives at least six to eight hours of direct sunlight each day. Before planting, soak the root ball of the plum sapling in water for at least one hour.

Prepare and amend the planting hole so that it is at least twice as wide and twice as deep as the root ball of the sapling. Plant and then fill in the hole, making certain not to cover the collar of the tree. Then water thoroughly.

Once established, these trees are generally carefree, but do require routine maintenance such as frequent irrigation and pruning. Though Yellow Egg plum trees are frequently listed as self-fertile, better pollination and increased yields are likely to result when planted with another plum tree, specifically for aid in pollination.