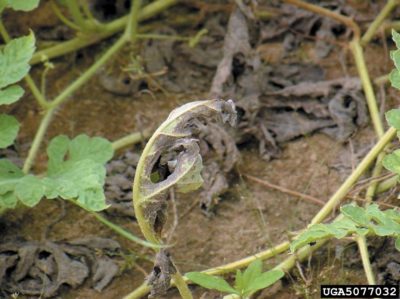 Downy mildew affects cucurbits, among them watermelon. Downy mildew on watermelons only affects the leaves and not the fruit. However, if left unchecked, it can defoliate the plant, making it unable to photosynthesize. Once leaves are damaged, plant health fails immediately and production of the profitable fruits is diminished. It is important to implement downy mildew treatment immediately upon noticing the disease to protect the rest of the crop.

Watermelons are a symbol of summer and one of its greatest pleasures. Who can picture a picnic without these juicy, sweet fruits? In crop situations, watermelon downy mildew poses serious economic threats. Its presence can reduce yields and the disease is extremely contagious. The first signs are yellow spots on leaves but, unfortunately, this symptom mimics many other plant diseases. We’ll go through the other signs and some preventative measures you can take to reduce the chances of this disease affecting your crop.

Downy mildew on watermelons shows as pale green spots on leaves which morph together into larger spots. These become yellow and eventually the leaf tissue dies. The undersides of the leaves seem water soaked before they die and dark spores may be visible. The spores are only on the undersides and appear dark purple in color. The spore growth is only visible when the leaf is wet and disappear when it dries.

Over time, the lesions turn brown and the leaf becomes almost entirely black and falls off. The leaf petioles are usually retained on the plant. Where control is not achieved, entire defoliation may occur, disrupting the plant’s ability to produce essential sugars to fuel growth. If fruit are present, the stem will rot.

Watermelons with downy mildew occur when temperatures are cool. Temperatures of 60 degrees F. (16 C.) at night and 70 degrees F. (21 C.) during the day encourage spore spread and growth. Rain or consistently humid conditions further cause spread.

The disease spores probably travel by wind, as an infected field can be miles away and infect another. The pathogen does not survive winters in the north. North Carolina State University has a site where they use several factors to predict where the pathogen will appear. Professional growers can check the site to view past incidents of the disease and forecasts for areas where it is likely to show up next.

Plant where there is plenty of air circulation and little shade. Avoid irrigating the leaves when there is not ample opportunity for them to dry quickly.

Copper fungicide may offer some protection but in large cropping situations mobile fungicides with an active ingredient that attacks the fungi are recommended. Mefanoxam with either mancozeb or chlorothalonil seem to provide the best protection. Sprays should be used every five to seven days.

There are not yet any resistant varieties of watermelon, so early notice and preventative practices are urgently needed.