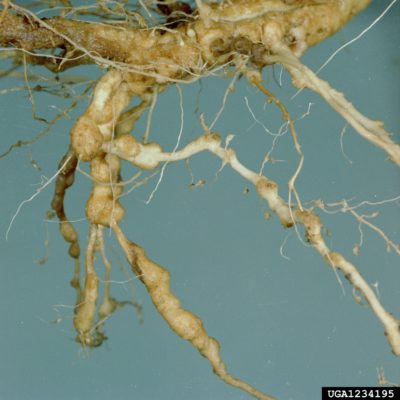 Symptoms of Watermelons with Nematodes

Nematodes live in the soil and feed on the roots of plants, reducing their ability to absorb water and nutrients and leading to a general decline in their health and productivity. Not only does nematode feeding weaken the plant, but it can also predispose plants to fungal or bacterial disease or transmit viral disease.

In watermelons with nematode damage, leaf chlorosis is evident and leaves may be stunted and wilted. Roots may form galls where the nematodes hide, feed, and reproduce.

Nematodes are notoriously difficult to control, so how do you go about controlling watermelon nematodes? Since they are microscopic, it is a good idea to have soil and root tissue samples tested to determine if nematodes are the cause of symptomatic plants. Testing needs to be done before planting since the nematodes become established once in the watermelon patch.

Of course, if planting has already occurred and symptoms appear to indicate nematodes, a quick test for root knot nematodes is to look at the roots of the plant. Root knot nematodes cause galls to form on roots and are readily evident if they are the culprit.

Management of areas infested with nematodes includes crop rotation with less susceptible crops or resistant varieties. Also, pre-plant nematicide treatments can be applied. Most nematicides are soil applied and incorporated into the top 3 to 6 inches (8-15 cm.) of soil. They have limited residual activity and are often used in conjunction with other cultural or chemical pest control.

Both of these management practices are just that, management. They will help to reduce the nematode population and improve crop production but not rid the area entirely of the nematodes.