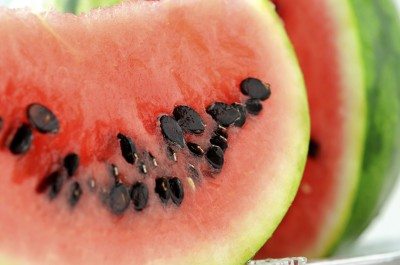 Have you ever had a watermelon that was so tasty you wished every melon you’d eat in the future was just as juicy and sweet? Maybe you have given some thought to harvesting seeds from watermelons and growing your own.

Watermelons (Citrullus lanatus) are a member of the family Cucurbitaceae originally hailing from southern Africa. The fruit is actually a berry (botanically referred to as a pepo) which has a thick rind or exocarp and a fleshy center. Although not in the genus Cucumis, watermelon is loosely considered a type of melon.

The flesh of watermelon is usually recognized as ruby red, but can be pink, orange, yellow, or white. The seeds are small and black or slightly mottled black/brown in color. There are between 300 and 500 seeds in a watermelon, depending upon the size of course. Although usually discarded, the seeds are edible and delicious when roasted. They are highly nutritious and high in fat as well. One cup (237 ml.) of watermelon seeds has over 600 calories.

How to Harvest Watermelon Seeds

It’s not always possible to save seeds from all types of produce but doing so is an act of autonomy– it teaches about plant biology and is just plain entertaining (at least for this garden geek). In the case of watermelon, it’s a bit of work separating the seeds from the flesh, but doable.

It’s simple, although a bit time consuming, to harvest watermelon seeds for growing. The melon should be allowed to ripen well past its edibility prior to harvesting, since seeds do not continue to ripen once the melon is removed from the vine. Pick the watermelon after the tendril nearest to it has completely dried and withered. Store the melon in a cool, dry area for an additional three weeks. Don’t chill the watermelon as this will damage the seeds.

Once the watermelon has cured, it’s time to remove the seeds. Cut open the melon and scoop the seeds out, flesh and all. Pour the “guts” into a large bowl and fill it with water. Healthy seed sinks to the bottom and dead (not viable) will float along with the majority of the pulp. Remove the “floaters” and pulp. Pour the viable seeds into a colander and rinse off any clinging pulp and drain. Allow the seeds to dry on a towel or newspaper in a sunny area for a week or so.

What Watermelon Seed Can You Plant?

Keep in mind that harvesting watermelon seeds for growing may result in a slightly different melon the next year; it depends on whether the melon is a hybrid or not. Watermelons purchased from the grocers are more than likely hybrid varieties. A hybrid is a cross between two types of watermelon having been selected and contributing their best qualities to the new hybrid. If you try to use these hybrid seeds, you may get a plant that produces fruit with only one of these qualities– an inferior version of the parent.

Whether you decide to throw caution to the wind and use seeds from the supermarket melon or are using those from an open pollinated heirloom variety, be aware that watermelons need plenty of space. Melons rely on pollinators, which mean that they are more likely to cross-pollinate with a possible disastrous result, so keep different types of watermelons at least a ½ mile (just under 1 km.) from each other.

Make sure the seeds are completely dry before storing watermelon seed. Any moisture left in them, and you are likely to find mildewed seed when it comes time to use it. Seeds, when properly prepared, can be stored for five or more years in a sealed jar or plastic bag.