Why Are My Watermelons Small: Treating Stunted Watermelon Growth 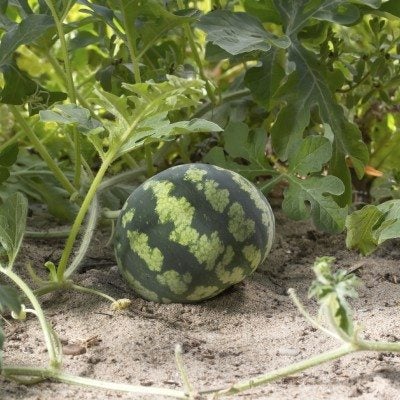 Synonymous with lazy, warm summer days, sweet, juicy watermelon might be arguably one of America’s favorite fruits. Watermelon comes in a multitude of cultivars and varies in size from the humongous “enough for everyone at the family reunion BBQ” to tiny, individual sized. Even the small watermelons usually get to about 5 pounds (2 kg.). So, what happens if you are growing watermelons and see stunted watermelon growth?

Why are My Watermelons Small?

Okay, let’s attack the obvious here. Do you know what type of watermelon you are growing? Are you sure it’s not one of the personal sized? I’ve been guilty of not labeling areas of the garden and forgetting not only what cultivar, but even exactly what I sowed in a certain spot!

Root damage – Stunted watermelon growth might be the result of damage occurring during transplanting. You may have damaged the roots irreparably and they just can’t take sufficient nutrients up to support further growth. Cultivating around the plant can also damage roots, which can affect fruit size.

Temperature – Watermelons like it hot, between 60 and 70 degrees F. (16-21 C.) at night and between 80 and 95 degrees F. (27-35 C.) during the day, preferably higher. If the temps are lower than this, plant growth slows. If temperatures are low in your area, this may very possibly be the reason for small watermelons.

Pests and disease – If you have small, misshapen fruit, the culprit might be an aphid infestation. The aphids act as vectors introducing the mosaic virus. Additional symptoms are small, mottled leaves and short vines. The aphids will be easy to spot since they exude sticky black honeydew that is visible. Look for the insects on the underside of the leaves.

To control mosaic virus, you need to get rid of the aphids. First, remove and destroy and infected plants, detritus and weeds from around the watermelons. Use an insecticidal soap to get rid of the aphids. Mix 2 ½ to 5 tablespoons (37-74 ml.) of soap per gallon of water and apply early in the morning. Take care to spray heavily under the leaves as well as on their surface. Repeat the spraying every four to seven days until aphid free.

Location – Planting watermelons in the wrong soil can also slow their growth. They like sandy loam amended with organic matter and fine sand. Heavy soils are a disaster for growing watermelons.

Poor pollination – Pollination also plays a part with watermelons not growing. If weather conditions were unfavorable (too windy, rainy, or cold for the bees to be out) at the time of pollination, you may get very few to no watermelons, and they may be excruciatingly small.

A final possibility for small watermelons…maybe you haven’t waited long enough. Watermelons grow quickly, but they need at least 70 to 130 days to mature.

Also, if your vines set many fruit, you may want to remove some of it. If the plant it trying to nourish lots of fruit, they will never attain any great size. That’s how giant pumpkins are grown. Only the largest fruit is left on the vine to languish and grow to gigantic proportions. Try, as painful as it may be, to remove all but a few fruit from the vine and see if they don’t begin attaining some size and heft.