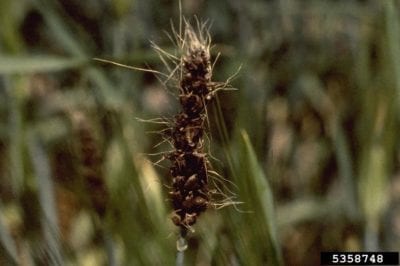 Barley loose smut seriously affects the flowering part of the crop. What is barley loose smut? It is a seed-borne illness caused by the fungus Ustilago nuda. It can occur anywhere barley is grown from untreated seed. The name comes from the loose seed heads produced that are covered in black spores. You don’t want this in your field, so keep reading for more barley loose smut info.

What is Barley Loose Smut?

Barley plants that have begun flowering and develop dark, diseased heads likely have loose smut of barley. The plants will look completely normal until they start to flower, which makes it difficult to get an early diagnosis. Barley with loose smut releases teliospores that infect other plants in the field. Crop losses are massive.

Barley with loose smut will become apparent at heading. Plants with the disease normally head earlier than healthy plants. Instead of producing kernels, olive black teliospores colonize the entire head. They are enclosed in a grayish membrane the soon fractures, releasing the spores. These dust over normal barley heads, infecting the seed and starting the process anew.

The disease survives in the barley seeds as dormant mycelium. Germination of that seed wakes up the fungus which colonizes the embryo. Infections are encouraged by cooler, wet weather in temperatures of 60 to 70 degrees Fahrenheit (15 to 21 C.).

Damage from Loose Smut of Barley

Barley heads have three spikes, each of which can produce 20 to 60 grains. When barley with loose smut is present, each and every seed, which is the commercial commodity, will fail to develop. After the teliospores rupture, all that is left are the empty rachis, or seed heads.

Barley is a cultivated crop in tropical and subtropical regions. The seed is used as animal feed and made into beverages, particularly malt beverages. It is also a food cereal for humans and a commonly planted cover crop. The loss of the seed heads from loose smut represents a huge economic hit but, in some countries, the grain is so relied upon that human food insecurity can result.

Developing resistant strains has not been a priority. Instead, barley loose smut treatment consists of treated seed, which is certified pathogen-free, and the use of fungicides. Fungicides must be systemically active in order to work.

In some cases, hot water treatment of the seed can remove the pathogen, but it must be done carefully to prevent damage to the embryo. The grain is first pre-soaked in warm water for 4 hours and then spends 10 minutes in a hot tank at 127 to 129 degrees Fahrenheit (53 to 54 C.). The treatment does delay germination but is fairly successful.