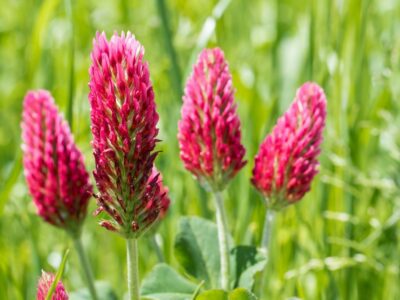 As the growing season winds down, it’s a great time to protect and recondition soil. Planting certain types of cover crops can provide extra nutrients, improve tilth, and prevent erosion due to inclement weather. Late summer cover crops are easy to start and can help fix nitrogen in soil and reduce compaction. In some cases, their late blooms will also provide nectar for pollinating insects.

The end of the harvest season signals the beginning of soil protection. As our harvests are finishing, the vegetable garden should be tidied and rejuvenated for the following season. Summer cover crops started in August take advantage of the warm weather for quick germination and establishment. Legumes and grains are the top choices for cover crops, with each having distinct benefits.

Some cover crops are best sown in spring, such as Dutch clover. It is used to cover and improve soil prior to planting vegetables. Other crops need heat to grow and may be sown in August.

Grains have the ability to enhance organic matter in soil and increase porosity when tilled into the earth, while increasing carbon. Planting a grain crop enhances biodiversity and contributes to crop rotation schedules. In areas where the crop is grazed, the animal’s manure also adds nutrients to the soil. Legumes harness nitrogen from the air through a symbiotic relationship with soil dwelling bacteria. This in turn is returned to the soil in a process called nitrogen fixing. The nitrogen is stored in the soil for the next season’s cash crops. There are both grain and legume crops for summer, but the general rule is to plant grain or vegetable crops followed by legumes.

The additional carbon released from decomposing grain crops is a perfect partner for the nitrogen reaped from a legume crop. A summer buckwheat cover crop will provide a thick weed-proof stand in just a few weeks. It is a classic cover crop for short period use. Other grains like oats are also useful in weed suppression and soil stabilization.

Some grain crops can survive winter and are tilled in the spring before they set seed. Annual ryegrass overwinters in many areas and keeps soil in place during winter storms. Winter wheat, sorghum, pearl millet, and rye are also good crops to plant in late summer, with the potential to overwinter.

Some legume crops will overwinter, such as a crimson clover cover crop. This plant will also provide beautiful red blooms that feed late season pollinators. It is tilled into soil in spring, enhancing nitrogen and tilth.

Hairy vetch is very hardy and will retain its greenery through winter. It does have the potential of becoming a nuisance and should be tilled in prior to blooming for control. Some legume cover crops are inoculated with rhizobia to enhance nitrogen gain. Combination grain and legume seed mixtures are available and provide diversity for maximum soil benefit.

Printer Friendly Version
Read more about Cover Crops
<Previous
Did you find this helpful? Share it with your friends!
FacebookTweetPinEmail
Related Articles
Newest Articles
You might also like…
Additional Help & Information