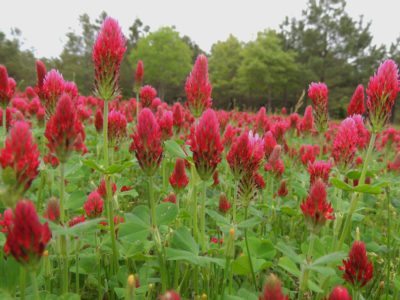 Very few nitrogen fixing cover crops are as breathtaking as crimson clover. With their bright crimson red, conical blooms atop tall, fleecy stems, one might think a field of crimson clover was planted purely for aesthetic appeal. However, this little plant is a tough workhorse in agriculture. Continue reading for more crimson clover information.

Crimson clover (Trifolium incarnatum) is native to the Mediterranean region. Also called incarnate clover because of their blood red blooms, crimson clover has been used as a cover crop in the United States since the mid 1800s. Today, it is the most common legume cover crop and forage plant for livestock in the U.S. Although it is not a native species, crimson clover has also become an important source of nectar for honeybees and other pollinators in the U.S.

Crimson clover plants are grown as an annual cover crop and, like other members of the legume family, they fix nitrogen in the soil. What sets crimson clover apart from other clover cover crops is their quick establishment and maturation, their cool weather preference, and their ability to grow in poor, dry, sandy soils where perennial clovers do not establish well.

Crimson clover prefers sandy loam but will grow in any well-draining soil. However, it cannot tolerate heavy clay or waterlogged areas.

How to Grow Crimson Clover

Crimson clover as a cover crop is seeded in the southeastern U.S. in fall to function as a nitrogen fixing winter annual. Its optimal growing temperatures are between 40 and 70 degrees F. (4-21 C.). Crimson clover plants prefer cool climates and will die back in extreme heat or cold.

In cool, northern climates, crimson clover can be grown as a summer annual cover crop, seeded in spring as soon as the danger of frost has passed. Due to its attractiveness to pollinators and nitrogen fixing ability, crimson clover is an excellent companion plant for fruit and nut trees, corn, and blueberries.

When growing crimson clover in pastures as a livestock forage plant, it is over seeded amongst grasses in late summer or fall to provide food for livestock during the winter months. As a green manure crop, it can produce about 100 pounds (45 kg.) of nitrogen per acre. It can be grown alone in pure stands, but crimson clover seed is oftentimes mixed with oats, ryegrass, or other clovers for diversified plantings.