What Is Winnowing – Chaff And Winnowing Garden Seeds 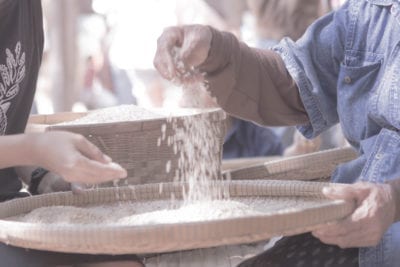 Growing your own grain in the garden, like wheat or rice, is a practice that’s gaining in popularity, and while it’s a little intensive, it can also be very rewarding. There’s a certain amount of mystery surrounding the harvest process, however, and some vocabulary that doesn’t often show up in other types of gardening. A couple obvious examples are chaff and winnowing. Keep reading to learn the meanings of these words, and what they have to do with harvesting grain and other crops.

Chaff is the name given to the husk surrounding a seed. Sometimes, it can apply to the stem attached to the seed as well. In basic terms, chaff is all the stuff you don’t want, and that needs to be separated from the seed or grain after harvest.

Winnowing is the name given to that process of separating the grain from the chaff. This is the step that comes after threshing (the process of loosening the chaff). Often, winnowing uses airflow – since the grain is much heavier than the chaff, a light breeze is usually enough to blow the chaff away, while leaving the grain in place. (Winnowing can actually refer to the separating of any seed from its husk or outer shell, not just grain).

There are a couple different methods for winnowing chaff and grain on a small scale, but they follow the same basic principle of allowing the lighter debris to blow away from the heavier seeds.

One simple solution involves two buckets and a fan. Place an empty bucket on the ground, pointing a fan set to low just above it. Lift the other bucket, filled with your threshed grain, and slowly pour it into the empty bucket. The fans should blow through the grain as it falls, carrying away the chaff. (It’s best to do this outside). You may have to repeat this process a few times to get rid of all the chaff.

If you have a very small amount of grain, you can winnow with nothing more than a bowl or winnowing basket. Just fill the bottom of the bowl or basket with threshed grain and shake it. As you shake, tilt the bowl/basket to its side and blow gently on it – this should cause the chaff to fall over the edge while the grain stays in the bottom.