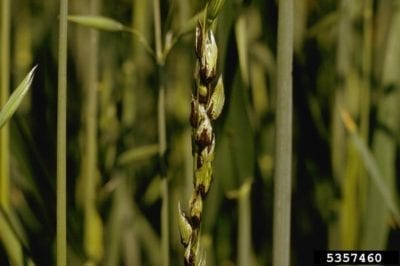 Smut is a fungal disease that attacks oat plants. There are two kinds of smut: loose smut and covered smut. They look similar but result from different fungi, Ustilago avenae and Ustilago kolleri respectively. If you are growing oats, you probably need oats covered smut information. Read on to learn the basic facts about oats with covered smut, as well as tips on oat covered smut control.

You can find oats with covered smut in many places that oats are grown. But the disease is not easy to spot. You may not realize that your oat plants are diseased until the crop develops heads.

Oats covered smut symptoms are generally not visible in the field. That’s because the smut fungus forms in small, loose balls inside the oat panicle. In oats covered with smut, the spores are contained within a delicate gray membrane.

The kernels of oats are replaced by the dark spore masses, composed of many millions of spores called teliospores. While the fungus destroys the seeds of the smut covered oats, it doesn’t ordinarily destroy the outer hulls. This effectively masks the problem.

It is only when the oats are threshed that the oats covered smut symptoms become apparent. Covered smut spore masses burst during harvest, giving off the smell of decaying fish. This also spreads the fungus to healthy grain that can then become infected.

It also spreads the spores onto the soil where it can survive until the next season. That means that susceptible oat crops the following year will also be infected with covered smut.

Unfortunately, there is no way of effectively treating oats with covered smut once you have threshed the oats. And a heavy outbreak of the fungal disease will almost inevitably result in a poor crop.

Instead, you should look to earlier methods of treating the issue. First, always use smut-resistant seeds that are recommended by your local university extension. With smut-resistant seeds, you are must less likely to suffer crop loss due to this issue.

If you don’t get smut-resistant oat seeds, you can also use a seed treatment for oats covered smut control. If you treat the oat seeds with an appropriate fungicide, you can prevent covered smut as well as regular smut.

Printer Friendly Version
Read more about Oats
<PreviousNext>
Did you find this helpful? Share it with your friends!
FacebookTweetPinEmail
Related Articles
Newest Articles
You might also like…
Additional Help & Information