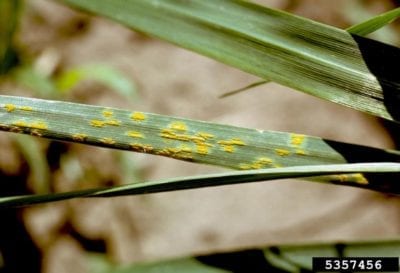 Crown rust is the most widespread and damaging disease found in oats. Epidemics of crown rust on oats have been found in almost every oat growing region with reductions of yield affected by 10-40%. For individual growers, oats with crown rust may result in a total crop failure, making learning about oat crown rust treatment very important. The following article contains information on oat rust control.

What is Crown Rust in Oats?

Crown rust on oats is caused by the fungus Puccinia coronata var. avenae. The amount and severity of the infection varies depending on weather conditions, number of spores present, and percentage of susceptible varieties planted.

Symptoms of Oats with Crown Rust

Crown rust in oats manifests as early as late April. The first symptoms are tiny, scattered, bright orange pustules on the leaves. These pustules may also appear on the leaf sheaths, stems and panicles. Soon after, the pustules burst to release thousands of microscopic spores.

The infection may be accompanied by yellow streaks on foliage or stems areas.

Similar in appearance to stem rust of oats, crown rust in oats can be distinguished by the bright orange-yellow color, the smaller pustules, and the lack of jagged bits of oat skin adhering to the pustules.

The severity of the infection depends on the species of oat and weather. Rust on oats is fostered by high humidity, heavy dews or light rains in succession, and a temp at or above 70?. (21?.).

A new generation of spores can be produced in 7-10 days and will be blown in the wind, spreading the disease from field to field, which makes oat rust control imperative. Oat rust is also spread by nearby buckthorn, a host that allows the disease to overwinter.

Unfortunately, oat crown rust treatment has a long way to go. The most effective method for controlling crown rust is to plant resistant varieties. Even that isn’t always completely effective at eliminating the disease. Given enough time, the crown rust fungus is able to overcome any resistance bred into oat varieties.

A properly timed application of fungicide can protect against infection of crown rust on oats. Spray at flag leaf emergence. If pustules have appeared on the flag leaf already, it’s too late. Fungicides approved for crown rust in oats are considered protective, meaning they can prevent the disease from infecting the plant but can’t do anything if the plant is already infected.

Printer Friendly Version
Read more about Oats
<Previous
Did you find this helpful? Share it with your friends!
FacebookTweetPinEmail
Related Articles
Newest Articles
You might also like…
Additional Help & Information