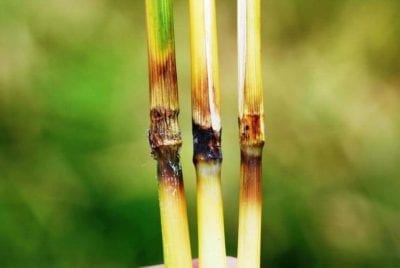 Who doesn’t like rice? It’s easy and can be quick to prepare, it’s a perfect addition to so many meals, it’s delicious and nutritious, and it’s inexpensive. However, a serious disease known as rice blast has caused devastating crop losses throughout North America and other rice-producing countries. Rice plants are grown in flooded fields and are not a common plant for the home garden – although many gardeners do try their hand at growing rice. While rice blast may not affect your garden, this rapidly spreading disease could cause a serious hike in the price of rice, affecting your grocery bill.

What is Rice Blast?

Rice blast, also known as rotten neck, is caused by the fungal pathogen Pyricularia grisea. Like most fungal diseases, rice blast fungus rapidly grows and spreads in warm, humid weather. Because rice is usually grown in flooded fields, humidity is hard to avoid. On a warm, humid day, just one rice blast lesion can release thousands of disease-causing spores into the wind.

The lesion can keep producing thousands of spores each day for up to twenty days. All these spores fly on even the gentlest breeze, settling on and infecting damp and dewy rice plant tissues. Rice blast fungus can infect rice plants in any stage of maturity.

The best practices for preventing rice blast is to keep rice fields flooded deeply with a continual flow of water. When rice fields are drained for various cultural practices, a higher incident of fungal disease results.

Rice blast treatment is done by applying fungicides at precise times of the plant’s development. This usually is early in the season, again as plants are in the late boot phase, and then again as 80-90% of the rice crop has headed.

Other methods of preventing rice blast are to plant only certified disease-free seed of rice blast resistant rice plants.