Tips For Harvesting Rye: How And When To Harvest Rye 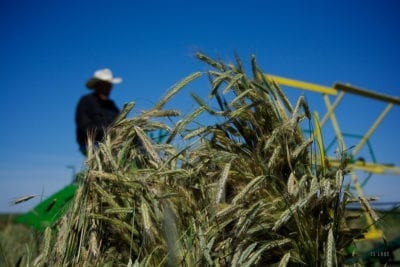 Rye is an extremely easy crop to grow. However, some gardeners don’t plant this cereal crop since they aren’t clear about how to harvest rye. While it’s true that picking rye crops is very different from gathering garden tomatoes, that doesn’t mean that harvesting rye is complex. Read on for information about managing a rye plant harvest, including tips on how and when to harvest rye.

Rye is grown as a food crop in many parts of the world and the cereal is frequently a central ingredient in breads. However, in home gardens, rye is often grown as an inexpensive and effective cover crop.

One of the hardiest cereal crops, rye can be seeded later in fall than similar crops. It is stronger and faster growing than wheat. As a cover crop, it offers an extensive soil-holding root system and does a great job at keeping weeds down. It also catches and holds excess nitrogen in the soil.

Gardeners who use rye as a cover crop are often not concerned with a rye plant harvest. That means they do not have to worry about picking rye crops. Rather, these gardeners kill off the rye when it has served its purpose by rolling, spraying, burning, or mowing.

When to Harvest Rye

If you are a gardener hoping for a rye plant harvest, you’ll need to know when to harvest rye and how. The timing is easy, since you can watch your crop go through the stages toward golden maturity. Once the rye is mature, you can start harvesting rye.

To figure out when it’s time to harvest, watch your grain pass through three stages. In the first stage, when you squeeze a grain, a milky liquid oozes out. In the second stage, this “milk” hardens inside the grain, and the grain simply indents if squeezed.

The time to harvest rye is during the third, mature stage. The grain is hard and heavy. When you pinch the grain, it does not ooze or indent, and the head hangs down. That’s when you want to start picking rye crops.

How to Harvest Rye

Once your grain is mature, you need to remove the seed heads from the plant for your rye plant harvest. The best method depends on the size of your crop and your preferences.

You can simply snap off the seed heads and gather them in a basket. Alternatively, you can use garden scissors, pruners, a sickle, or a scythe. The tools are useful for a bigger crop.

Don’t forget to dry the seed heads or rye sheaves. Let them dry out for a week or more before the threshing process. That’s when you remove the edible portions of the crop. You can separate the heads from the stalks by rubbing the seed heads between your hands, hitting them with a wooden stick, treading on them with your feet, or knocking them about in a metal can. Then separate the seeds by pouring them from one pail to another in front of a fan.