Harvest Time For Tomatoes: When To Pick Tomatoes 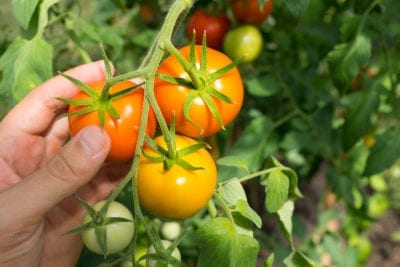 When it’s harvest time for tomatoes, I think there should be a celebration; perhaps a federal holiday should be declared– I love this fruit so much. There are a multitude of ways to prepare tomatoes from dried to roasted, to stewed, canned, even frozen (as many as there are tomato varieties).

If you’re lucky enough to be able to grow your own tomatoes, the question is when are tomatoes ready to harvest? Tomatoes are sneaky. We’re used to purchasing vibrant red tomatoes from the grocers, but the fact is that color is not a good indicator of when to pick tomatoes. Waiting for a time when the fruit is uniformly red may be a little late for picking the tomatoes.

When to Pick Tomatoes

Tomatoes are gassy– I mean they emit a gas. Ethylene gas is produced by fully formed mature green tomatoes. Inside the mature green tomato, two growth hormones change and cause the production of the gas, which in turn ages the cells of the fruit, resulting in softening and loss of the green color, turning into a red shade. The ethylene increases the carotenoids (red and yellow colors) and decreases the chlorophyll (green color).

It is because of this process, tomatoes are one of the only vegetables, I mean fruit, which can be picked before it is completely ripened. Harvest time for tomatoes should ideally occur when the fruit is a mature green and then allowed to ripen off the vine. This prevents splitting or bruising and allows for a measure of control over the ripening process.

How to Harvest Tomato Fruit

Harvest time for tomatoes will occur at the end of its growing season, usually late summer, once the tomatoes are at their mature green stage. Tomatoes harvested before this, such as those you buy at the supermarket, have often been picked before this stage so they can ripen during transport and, thus, have a lesser flavor than those left on the vine a bit longer.

There is a fine line when picking tomatoes at the mature green stage. Look for the first light blush of color as an indicator of when to pick tomatoes to ensure no loss in their essence. Of course, you can also harvest tomato fruit when it is ripe; ripe fruit will sink in water. These vine ripened tomatoes may be the sweetest, but some types of tomato are too heavy to vine ripen, hence picking tomatoes at their mature green stage and allowing the ethylene gas to continue the ripening process.

The “how” to harvest tomato fruit is pretty basic. Watch the bottom of the fruit carefully, as this is where tomatoes begin to ripen, especially large heirloom varieties. Lightly squeeze the fruit to test for firmness. Once the first bloom of red appears on the skin of the tomato, harvest time for tomatoes are nigh.

Grasp the fruit firmly, but gently, and pull from the plant by holding the stem with one hand and the fruit with the other, breaking the stalk just above the calyx that has formed to protect the bud.

Once you’ve harvested the tomatoes, store them indoors to continue to ripen. Green tomatoes will ripen faster if wrapped in newsprint, which will contain the ethylene gas and hasten the process. Store them at 55 to 70 degrees F. (13-21 C.)– or cooler if you wish to slow the ripening and warmer to hasten it– and check routinely for ripeness. They may last from three to five weeks stored this way.