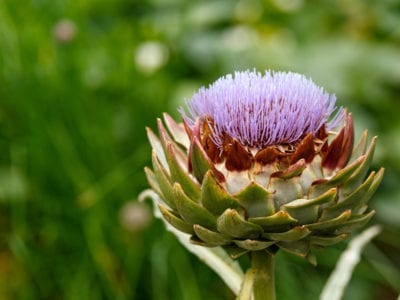 Considered by some to be just an invasive weed and by others as a culinary delight, cardoon plants are a member of the thistle family, and in appearance, are very similar to the globe artichoke; indeed it is also referred to as the artichoke thistle.

So what is cardoon– weed or useful medicinal or edible plant? Growing cardoon attains a height of up to 5 feet (1.5 m.) tall and 6 feet (2 m.) wide at maturity, depending upon the cultivar. Large spiny perennials, cardoon plants flower from August to September and its flower buds may be eaten just as the artichoke’s are.

Native to the Mediterranean, cardoon plants (Cynara cardunculus) are now found in dry grassy areas of California and Australia, where it is considered a weed. Originally cultivated in southern Europe as a vegetable, growing cardoon was brought to the American kitchen garden by the Quakers in the early 1790’s.

Today, cardoon plants are grown for their ornamental properties, such as the silvery grey, serrated foliage, and bright purple flowers. The architectural drama of the foliage provides year-round interest in herb garden and along borders. The vibrant blooms are also great attractors of bees and butterflies, which pollinate the hermaphroditic flowers.

The “How To’s” of Cardoon Planting

Cardoon planting should occur via seed indoors in late winter or early spring and seedlings may be transplanted outside after the danger of frost has passed. Mature cardoon plants should be divided and cardoon planting of the offsets accomplished in early spring, leaving plenty of space between for growth.

Although cardoons can grow in nutritionally poor soil (highly acidic or alkaline), they prefer full sun and deep, rich soil. As mentioned, they can be divided or planted by seed propagation. Cardoon seeds are viable for around seven years or so once they ripen from September to October and are collected.

Other artichoke thistle info reinforces the cardoon size; it is much larger and hardier than globe artichokes. While some people eat the tender flower buds, most folks eat the fleshy, thick leaf stalks, which require plentiful irrigation for healthy growth.

When harvesting cardoon leaf stalks, they need to be blanched first. Strangely, this is done by tying the plant into a bundle, wrapping with straw, and then mounded with soil and left for one month.

Cardoon plants being harvested for culinary purposes are treated as annuals and are harvested during the winter months– in areas of mild winters, from November to February and then re-sowed in early spring.

The tender leaves and stalks can be cooked or eaten fresh in salads while the blanched portions are used like celery in stews and soups.

The wild cardoon’s stem is covered with small, almost invisible spines that can be quite painful, so gloves are useful when attempting to harvest. However, a mostly spineless cultivated variety has been bred for the home gardener.

Other Uses for Cardoon Plants

Beyond its edibility, growing cardoon may also be used as a medicinal plant. Some people say it has mild laxative qualities. It also contains cynarin, which has cholesterol-lowering effects, although most cynarin is garnered from the globe artichoke due to its comparative ease of cultivation.

Bio-diesel fuel research is now focusing on cardoon plants as a source of alternate oil processed from its seeds.