Chicory Plant Harvest: How To Harvest Chicory Root In The Garden 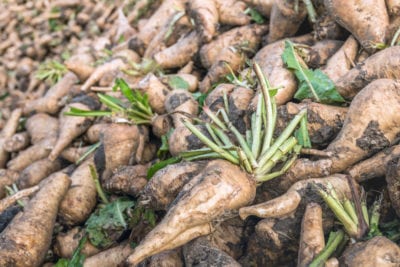 In its native range near the Mediterranean, chicory is a wildflower with bright, happy blossoms. However, it is also a hardy vegetable crop, as its roots and leaves are edible. The time for harvesting chicory depends on the reason you are growing it. Read on for information and tips on picking chicory leaves and harvesting chicory roots.

Chicory started out as a pretty blue wildflower growing like a weed around the Mediterranean region in Europe. Although it has been cultivated for over 1,000 years, it hasn’t changed much from its wild form.

Many parts of the chicory plant are edible, and it is a vegetable used in three different forms. Some chicory is grown commercially for its hefty roots that are dried and roasted. When ground, the chicory root is used as a coffee-type drink.

Chicory in the garden is usually witloof or radicchio. Both can be grown for their greens, and the chicory plant harvest involves picking chicory leaves. They are slightly bitter like dandelion greens, which has also earned them the name Italian dandelion.

The third use of the chicory plant applies to witloof chicory alone. The roots are harvested and used to force new, edible leaves called chicons.

When to Harvest Chicory

If you are wondering when to harvest chicory, the timing of harvesting chicory varies depending on how you want to use the plant. Those growing witloof chicory for its greens need to start picking leaves while they are tender but sufficiently large. This can happen three to five weeks after planting.

How to Harvest Chicory Root

If you are growing witloof chicory and plan to use the roots for forcing chicons, you’ll need to harvest the crop just prior to the first autumn frost. This is usually in September or October. Remove the leaves, then lift the roots from the soil.

You can trim the roots to a uniform size, then store them for a month or two at a temperature around freezing before forcing. Forcing occurs in complete darkness by standing the roots in wet sand and allowing them to produce leaves. The new leaves are called chicons and should be ready for harvest in about three to five weeks.

Resembling large carrots, roots harvested as a vegetable are ready once the crown reaches about 5-7 inches (12.5-18 cm.) in diameter. The usable portion of the taproot may be up to 9 inches (23 cm.) long. After cleaning and removing soil, the roots may be cubed and roasted for grinding. Ideally, they should be used within a few days of harvest, as they typically don’t store well for long periods.