Radicchio Growing – How To Grow Radicchio In The Garden 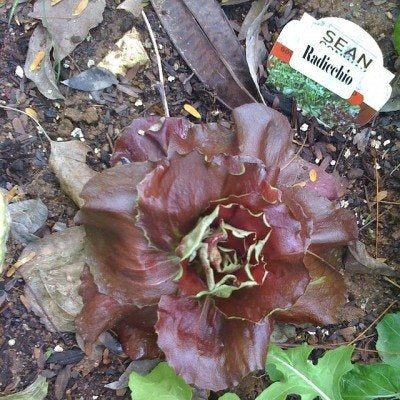 If you have a desire to expand the types of salad greens you routinely use, you may want to try radicchio growing. There are a few radicchio varieties to choose from, all of which are easy to care for and grow.

Radicchio is a member of the Chicory family (Asteraceae), commonly found and utilized in many areas of Europe. Radicchio’s popularity has more recently crossed the pond and is now commonly utilized in restaurants in salads, sautéed, and often used as a garnish due to its ruby hue. Radicchio (Cichorium intybus) can now be found at farmers markets and even the local grocery produce department.

Radicchio has burgundy colored leaves with white ribs, resembling a small cabbage head, and is not to be confused with radichetta, another chicory type with the red coloration but lacking the heading form. Radicchios leaf texture is similar to that of the French endive, another popular heading chicory variety.

How to Grow Radicchio

Depending on your USDA zone, radicchio may be grown as a spring, summer, or fall vegetable, but the most common red leaf heading radicchio does best grown in cool temperatures. Radicchio is frost tolerant for a short period of time and growing temperatures may range as great as from 30 to 90 degrees F. (-1 to 32 C.). However, higher temperatures for any length of time will burn the leaves of the radicchio.

While the plant prefers plenty of sunlight, it tolerates shade in the garden as well. Radicchio will grow in a variety of soil conditions from sandy to clay-like loam, but it much prefers a soil pH of 7.5 to 8.0, excellent drainage, and adequate irrigation.

Radicchio can be direct seeded or transplanted depending on the time of year and what climate you are in. If transplanting, start the seeds indoors four to six weeks before transplantation. Generally, you should direct sow after the danger of frost has passed. Plants should be 8 to 12 inches (20-31 cm.) apart in the row depending on the cultivar.

Maturation occurs around the 125 to 130 day mark. Radicchio plants need a constant amount of irrigation due to their shallow roots and to encourage the growth of the tender shoots.

There are many varieties of radicchio intended for optimum commercial growth in specific climes. A couple of types, which can be found in a good seed catalogue, include:

Radicchio plants are often attacked by the same types of pests as the cabbage family such as aphids, many beetle types, thrips, and ants.

The care of radicchio affected with these pests can be countered by any number of chemical or biological controls. Consult with your local garden supply on methods of control related to your specific insect invader, type of plant, and climate.

Radicchio is not only susceptible to the harsh effects of the sun and a sundry of pests, it can also be affected by a variety of fungal issues and powdery molds. These usually occur due to inadequate drainage and are most common in areas of the country with extremely wet conditions.