Yellowing Dill Plants: Why Is My Dill Plant Turning Yellow 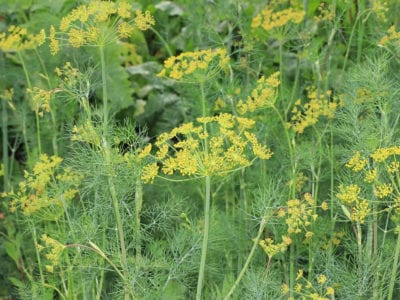 Dill is one of the easiest herb to grow, needing just average soil, plenty of sunlight and moderate moisture. Problems with dill plants aren’t too common, as this is a hardy, “weed-like” plant, which thrives in conditions more tender specimens can’t tolerate. However, yellowing dill plants can be an indication of incorrect cultural care, improper site or even insects or disease. Yellow leaves on dill can also indicate the end of the season. If you are asking, “why is my dill plant turning yellow,” read on for more information about common causes.

Why is My Dill Plant Turning Yellow?

We all know dill as a main flavoring in canned pickles, as a fresh herb for flavoring fish and for its seeds as a culinary accent to a variety of recipes. This plant is thought to be from the Mediterranean and has a host of health benefits as well. The slender, hollow stems and airy foliage combined with the umbels of bright yellow flowers also enhance any garden bed. When dill weed turns yellow, you need to find the cause or potentially lose all that great potential.

If it is late September to October, you might as well ask why is the sky blue. Yellowing is a normal process when cold temperatures enter the picture and the plant begins to die back. Dill is an annual plant that sets seed at the end of the season and then finishes up its life cycle. Cold weather will signal that the growing season is over, and once the seed is set, the plant has done its work and will die.

Yellowing dill plants are also commonly caused by incorrect cultural care. The herb requires 6 to 8 hours of bright sunlight. Lack of light can cause some dulling in leaves. There really can be too much of a good thing. Excess fertilizer causes salt build up in soil so dill weed turns yellow. Dill prefers well-draining soil that is not too fertile.

Yellow Leaves on Dill from Disease and Insects

Dill is not especially bothered by insects but there are always a few bad actors. Primary among the pests of dill are aphids. Their sucking feeding activity causes the plant to lose sap and the leaves will stunt and yellow. You may actually see the insects, but their presence is also easily recognized by the honeydew they leave behind. This sticky substance encourages the growth of sooty mold on leaves and stems.

Carrot Motley Dwarf is a disease transmitted by the aphids that further yellow leaves with red streaks and stunted growth.

Downy mildew is another fungal disease that causes yellow spots on the upper surface of foliage and white cottony growth on the undersides.

Other Problems with Dill Plants

Dill can become weedy, so it is best to control the growth of the plant while it is young. Cut off seed heads before they form to prevent over seeding. Most insect pests avoid dill, but it is great for attracting beneficial insects.

Cutworms may pose a problem to young plants and root knot nematodes will attack the root system and cause overall plant yellowing.

If you are growing your dill for the airy foliage, harvest it early in the season, as hot temperatures force the plant to bolt, producing the thick, hollow stems and ultimately the flower head.

Happily, in most areas, dill is relatively trouble free and easy to manage. Long season gardeners can even hope to get a second crop of dill when seed is planted in mid-summer.

Printer Friendly Version
Read more about Dill
<PreviousNext>
Did you find this helpful? Share it with your friends!
FacebookTweetPinEmail
Related Articles
Newest Articles
You might also like…
Additional Help & Information